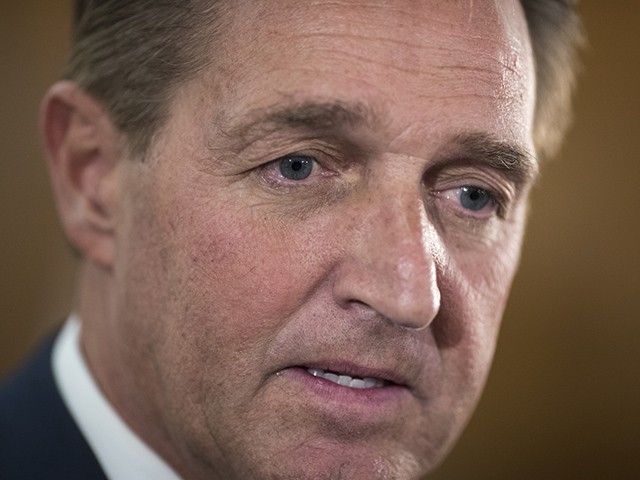 Sen. Jeff Flake (R-AZ) warned in his farewell remarks Thursday morning that the United States faces “threats” from within its political system, stating “to say that our politics is not healthy is something of an understatement.”

“I believe that we all know well that this is not a normal time, that the threats to our democracy from within and without are real, and none of us can say with confidence how the situation that we now find ourselves in will turn out,” Flake said in his final floor speech. “[T]o say that our politics is not healthy is something of an understatement.”

Flake, who is retiring from the Senate in January after declining to run for re-election, is among President Donald Trump’s most outspoken critic in Congress, often criticizing both the president’s American First agenda and tone. The outgoing lawmaker warned that while the U.S. political institutions remain intact, the country is “by no means immune” to authoritarianism.

“Let us recognize from this place here today that the shadow of tyranny is once again enveloping parts of the globe,” said Flake “And let us recognize as authoritarianism reasserts itself in country after country that we are by no means immune.”

Recalling his days as a monitor of Namibia’s transition to democracy, Flake spoke of Czechoslovak President Vaclav Havel’s speech before Congress in 1990 about the importance of support the Soviet Union before its collapse.

“Vladimir Putin would go on to be president and he is president still, and just as he hijacked democracy in his own country, he is determined to do so everywhere,” the Arizona Republican said. “Denial of this reality will not make it any less real. This is something that is staring us in the face, right now, as we are gathered here today.”

Flake, who expressed “gratitude” for the opportunity to serve in Senate, reflected on his inaugural Senate floor speech six years prior. “I noted then and echo today that serious challenges lie ahead, but any honest reckoning of our history and our prospects will note that we have confronted and survived more daunting challenges than we now face,” he said.  “Ours is a durable, resilient system of government, designed to withstand the foibles of those who from time to time occupy this place, including yours truly.”