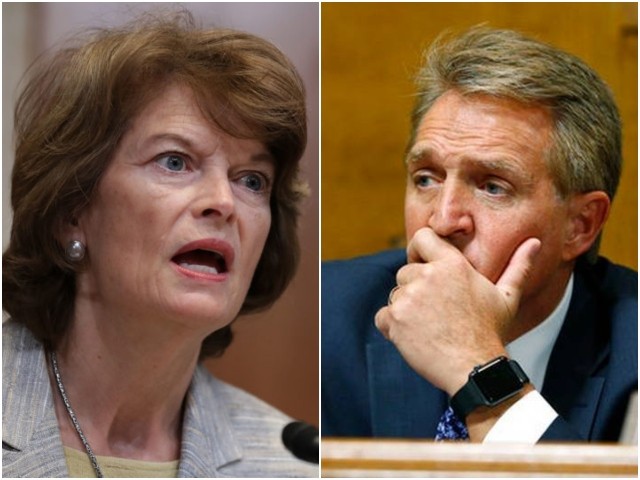 Flake, one of the small group of Republican senators who refused to conclusively support or oppose Kavanaugh through the weeks of Senate wrangling over allegations of teenage sexual misconduct, voted to end debate on Kavanaugh’s confirmation Friday morning. Shortly after the vote, Flake indicated he would not flip to a “no” vote “unless something big changes”:

SEN FLAKE says he plans to vote yes tomorrow on Kavanaugh unless something big changes and he doesn’t see what would change. Says was a hard decision for everybody.

Flake was joined in his vote for cloture by every other Senate Republican except Lisa Murkowski (R-AK). Along with Sen. Joe Manchin’s (D-WV) vote, this was enough to set up a final vote of the full Senate Saturday afternoon. Flake did not address Murkowski’s unexpected break, which she claims she decided only as she walked to the Senate chamber for the vote.

Facing an uphill primary battle, Flake is retiring at the end of this term, making his role in the Kavanaugh confirmation likely one of the last significant actions of his Senate career. He shot to the forefront of what is likely the most contentious confirmation fight in American history when, as a Senate Judiciary Committee member, he refused to signal his support for Kavanaugh as allegations against him multiplied. Eventually, Flake voted to recommend Kavanaugh for confirmation but conditioned his final vote on the FBI conducting a seventh background investigation on Kavanaugh.

That investigation is complete, and all reports indicate the FBI found no evidence to corroborate any of the allegations Kavanaugh’s accusers brought.

With Murkowski now presumably a “no” vote, Flake’s “yes” is likely a prerequisite for Kavanaugh’s confirmation. The only remaining plausible swings are Sen. Susan Collins (R-ME), who voted “yes” in Friday morning’s cloture vote and will make her final voting intentions known Friday afternoon on the Senate floor, and Manchin, whose vote for cloture may indicate he will support Kavanaugh in the final vote.

Complicating matters is that a solid “yes” vote from Sen. Steve Daines (R-MT) is in jeopardy, as he may be unavailable to vote at all due to his daughter’s wedding.

Without Daines’s vote and with Murkowski’s vote against Kavanaugh, all three–Flake, Collins, and Manchin–as well as Vice President Mike Pence’s tiebreak, are needed to confirm Kavanaugh. With Daines, merely two of the three will suffice.