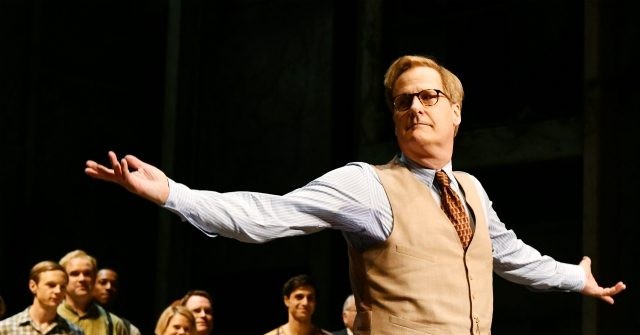 Daniels publicized the song and his role in the miniseries in a post responding to a tweet from Trump questioning when “something significant” will happen to James Comey.

“Something significant did happen to him, Mr. President. He’s in Showtime’s top multi platform debut ever. You can watch it On Demand,” the Newsroom star wrote. “In the meantime, feel free to sing along to Trumpty Dumpty Blues.”

@realDonaldTrump Something significant did happen to him, Mr. President. He’s in Showtime’s top multi platform debut ever. You can watch it On Demand. In the meantime, feel free to sing along to Trumpty Dumpty Blues @ https://t.co/irBf2PGeTK https://t.co/3rZXLpWAyW

Here’s a short sample of the song’s lyrics:

Well his face is orange, his ties too long / His hairs oversized and his suits just wrong

When he peers out from behind those dilated eyes / That’s no angel of mercy, that’s the devil in disguise

Like the majority of Hollywood actors, Jeff Daniels has never made a secret of his hatred of Trump and support for the Democratic Party. In an interview with Morning Joe earlier this week, Daniels warned that Republicans could be voting for a “president that is going to jail” after the New York Times published incomplete excerpts of his historic tax returns.

“Everybody respected the rule of law. Everybody respected those things that made America and make America the free country that it is,” Daniels explained.” Until now. And it’s been painfully obvious from before 2016, but certainly in the four years previous. And look at what happened yesterday. That’s what autocrats do.”

Last year, the 65-year-old star even suggested that the Democrats should nominate someone willing to “punch” Trump in the face. “You know, I — whittle it down, but we need somebody that can take this guy on, that can punch him in the face,” he said at the time.