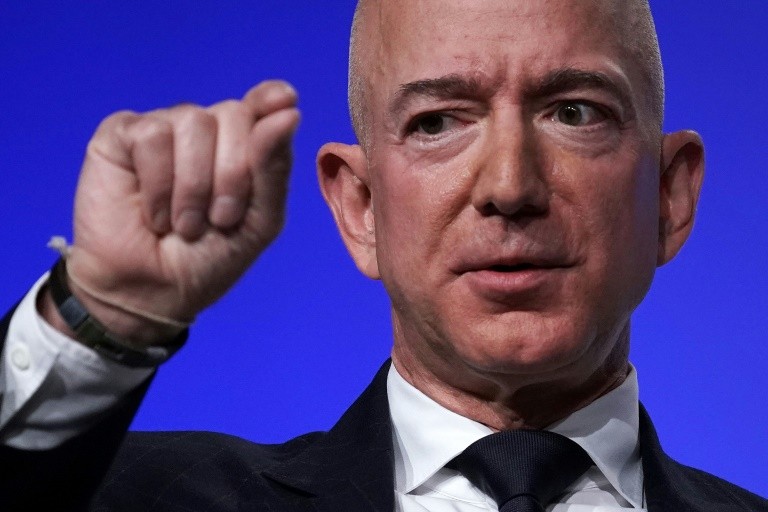 Since 1997, David Boies has been chairman of Boies Schiller Flexner. Besides helping Weinstein settle a sexual harassment claim, Boies reportedly personally signed a contract with the shadowy private investigation company Black Cube, which engaged in efforts to foil the extensive New York Times investigation into the accusations against Weinstein.

Those Black Cube actions reportedly included one of the firm’s operatives posing as a women’s rights activist in order to gather information from one of Weinstein’s female accusers. An operative hired by Black Cube also reportedly went undercover to meet with reporters probing the Weinstein allegations to try to obtain the names of female accusers speaking to the news media about the Hollywood giant.

In his news-making post at Medium, Bezos released email exchanges with the National Enquirer’s parent company, American Media, LLC, showing that the billionaire utilized Boies Schiller Flexner in his legal communications with the media firm related to the private pictures and extortion claims.

The New York Times further reported on the specific Boies Schiller attorneys working for Bezos, who founded Amazon and owns The Washington Post:

Also working on behalf of the Amazon founder is the law firm Boies Schiller Flexner. It has long represented Amazon in corporate matters, but now lawyers there are working for Mr. Bezos personally.

One of them, Jonathan Sherman, previously represented American Media as it worked to squash negative stories about President Trump, according to a person familiar with the situation. Another working for Mr. Bezos, William Isaacson, represents Amazon in its corporate matters.

Notably, David Boies himself is not listed as representing Bezos.

In his Medium blog post on Thursday, Bezos accused the National Enquirer publisher of “extortion and blackmail,” alleging that the supermarket tabloid attempted to leverage embarrassing personal photos in exchange for the billionaire dropping legal claims and publicly stating that he has “no knowledge or basis for suggesting that AM’s coverage was politically motivated or influenced by political forces.”

The alleged affair with Lauren Sanchez, a former host of the Fox show “So You Think You Can Dance,” was reportedly a key factor in the announcement of Bezos’ pending divorce from his longtime wife, novelist MacKenzie Bezos.

Boies Schiller Flexner has long been led by co-founder David Boies, considered one of the most powerful attorneys in America. A Bloomberg profile characterized Boies’ work thusly: “For decades, Boies has been cleaning up his wealthy clientele’s messes. More quietly, he’s been cleaning up his own.”

Interviews with more than a dozen people who’ve worked with him show that this isn’t the first time his loyalty to a friend or client has tested the bounds of propriety and called his judgment into question. “I probably do tend to stay with friends and clients more than some other people would,” he says. “Sometimes that can subject me to criticism.”

Boies survived those episodes with his aura intact. Inside the firm’s offices, he and his lieutenants expect nothing different this time around. They’re sure they’ll outlast the current wave of moral outrage — and even imagine themselves on the right side of history.

The profile revolved around the law firm’s defense of its now former client Harvey Weinstein and Boies’ own close personal and financial relationship with the fallen Hollywood big shot. Besides the firm’s representation of the movie mogul, Boies himself has done business with Weinstein, was regularly seen in Weinstein’s social orbit and was described by the New York Times as a “trusted adviser to Mr. Weinstein.”

A widely cited New Yorker piece penned by Ronan Farrow first broke the story that Boies inked a deal with Black Cube, described as a private investigation outfit founded by former Israeli intelligence analysts, in an attempt to stop the Times’ investigation into Weinstein, with an operative of Black Cube reportedly pretending to be a women’s rights activist while trying to gather information from one of Weinstein’s female accusers. A Black Cube agent also met with reporters undercover to divine the names of those women who were secretly speaking to the news media about Weinstein, the New Yorker reported.

Boies’ actions took place while Boies Schiller Flexner was separately representing the New York Times, including in a libel case.

Two private investigators from Black Cube, using false identities, met with the actress Rose McGowan, who eventually publicly accused Weinstein of rape, to extract information from her. One of the investigators pretended to be a women’s-rights advocate and secretly recorded at least four meetings with McGowan. The same operative, using a different false identity and implying that she had an allegation against Weinstein, met twice with a journalist to find out which women were talking to the press. In other cases, journalists directed by Weinstein or the private investigators interviewed women and reported back the details.

Boies personally signed the contract with Black Cube, according to the New Yorker, with the attorney admitting that the opposition information gathered from one private investigation firm was funneled through him to Weinstein:

Boies confirmed that his firm contracted with and paid two of the agencies and that investigators from one of them sent him reports, which were then passed on to Weinstein. He said that he did not select the firms or direct the investigators’ work.

On October 28, 2016, Boies’s law firm, Boies Schiller Flexner, wired to Black Cube the first hundred thousand dollars, toward what would ultimately be a six-hundred-thousand-dollar invoice. (The documents do not make clear how much of the invoice was paid.) The law firm and Black Cube signed a contract that month and several others later.

One, dated July 11, 2017, and bearing Boies’s signature, states that the project’s “primary objectives” are to “provide intelligence which will help the Client’s efforts to completely stop the publication of a new negative article in a leading NY newspaper” and to “obtain additional content of a book which is currently being written and includes harmful negative information on and about the Client,” who is identified as Weinstein in multiple documents.

After the New Yorker broke the story, Boies characterized his involvement with Black Cube as a mistake. “We should not have been contracting with and paying investigators that we did not select and direct,” he conceded. “At the time, it seemed a reasonable accommodation for a client, but it was not thought through, and that was my mistake. It was a mistake at the time.”

Boies’ actions drew sharp criticism and did not sit well with the firm’s other client. The New York Times fired Boies’ firm over the matter and called the famed attorney’s conduct in the affair, which included an attempt to stop the Times’ own reporting, a “grave betrayal of trust.”

Mr. Boies responded in a public statement that his firm had a clause in its retainer agreement with The Times that purported to waive all conflicts of interest on matters unrelated to cases in which the newspaper had retained the firm. But as The Times’s leadership pointed out in its own statement, it never contemplated that the firm would contract with investigators to do opposition research on its own reporters. Unsurprisingly, The Times considered this conduct to be a “grave betrayal of trust,” and grounds to terminate the firm. It is hard to imagine how a lawyer of Mr. Boies’s caliber would not have anticipated this reaction.

It gets worse. Bar ethical rules prohibit lawyers not only from engaging in fraud, deceit or misrepresentation, but also from inducing others to do so. They also specifically forbid lawyers from directing non-lawyers to engage in prohibited conduct. Black Cube employees were in fact involved in such deceit; investigators misrepresented their identities in order to gain confidences from women whom Mr. Weinstein had harassed or assaulted.

Although Mr. Boies now claims that he had no knowledge of such practices, he surely was in a position to have such knowledge and had reason to suspect them. He had hired an organization known for hardball tactics and reportedly received reports of their findings.

Besides hiring a firm to try to allegedly stop the Weinstein accusations from going public, Boies also helped Weinstein reach a settlement with one alleged victim of the movie mogul. Former Weinstein Company employee Lauren O’Connor authored a 2015 memo in which she detailed allegations of sexual harassment and complained that she was afraid to travel with Weinstein, leading Boies to help Weinstein settle with O’Connor.

O’Connor told the New York Times that she believes the settlement was a way of attempting to make her accusations disappear after she persisted with the charges. “The first time I spoke out, the message from H.R. was, ‘This is not our problem,’” she told the newspaper. “The second time I spoke up the response was, ‘How can we quickly make this go away?’”

Boies is more deeply tied to Weinstein. The lawyer reportedly met Weinstein in 2001 and discussed the possibility of writing a memoir for Weinstein’s imprint Miramax Books. The memoir, Courting Justice, was published by Weinstein’s company in 2004.

In 2005, Boies helped Weinstein and his brother Bob separate from the Walt Disney Co. He also provided counsel for the Weinsteins after they first formed the Weinstein Co.

The relationship extended well beyond legal advice. Weinstein and Boies co-hosted a private screening in New York for liberal activist Michael Moore’s Fahrenheit 9/11. The two were seen together having dinner with Hillary Clinton days after her loss against Barack Obama in the 2008 presidential primaries and immediately thereafter Clinton began discussions with Weinstein regarding a TV documentary about her presidential bid. Weinstein was on the invite list for Boies’ 75th birthday bash held at the Wynn Las Vegas in 2016.

Boies’ daughter Mary Regency got one of her first acting credits for her role in Silver Linings Playbook, a film produced in 2012 by the Weinstein Co. Weinstein also acquired the U.S. rights for a Western that was to be executive produced by Boies and produced by his daughter via the Boies/Schiller Film Group, which was formed by Boies and the son of his legal partner, Jonathan Schiller. Boies also reportedly invested a total of $10 million in two Weinstein Co. movies.

Boies finally dropped Weinstein as a client in early November 2017.

Speaking to Ronan Farrow, Boies admitted that he had seen enough red flags that should have alerted him to Weinstein’s treatment of women. “Although he vigorously denies using physical force, Mr. Weinstein has himself recognized that his contact with women was indefensible and incredibly hurtful,” Boies said.

Boies added: “In retrospect, I knew enough in 2015 that I believe I should have been on notice of a problem, and done something about it. I don’t know what, if anything, happened after 2015, but to the extent it did, I think I have some responsibility. I also think that if people had taken action earlier it would have been better for Mr. Weinstein.”

Following the negative publicity about his ties to Weinstein, Boies’s law firm upped the number of attorneys on its executive committee from seven to 11, while Boies was reelected chairman last December.