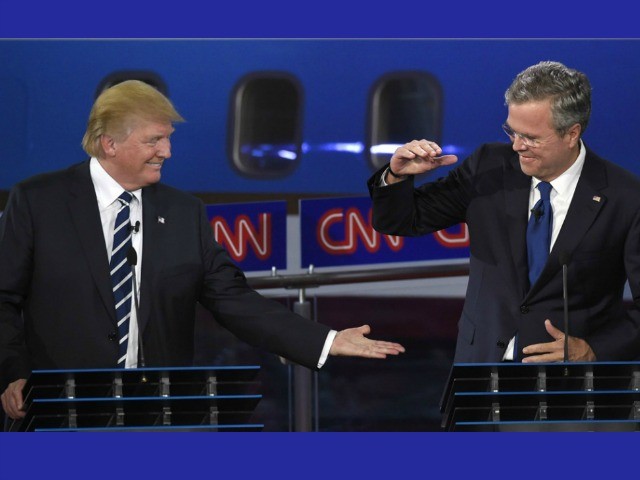 The GOP establishment’s champion in the 2016 primaries, Jeb Bush, is praising President Donald Trump’s upgrade to the H-1B outsourcing program.

“New H-1B rules would result in up to 5,340 more immigrants with a master’s degree or higher getting selected for a visa,” Jeb Bush tweeted February 1. “A good change in policy.”

Bush’s endorsement is a problem for Trump, who ran against Bush’s pro-Wall Street policies.

In the 2016 campaign, Bush promised to jump-start economic growth for investors by accelerating the inflow of foreign consumers and workers. In contrast, Trump promised to help voters by reforming the immigration system and visa worker programs. On his Inauguration Day, Trump announced his policy of “Hire American.”

The “Hire American” policy has successfully pushed down the arrival of migrants and refugees and is forcing employers to hire and pay Americans at higher rates than ever before. In 2018, for example, wages rose by 3 percent, putting Trump on track to raise wages by a huge 10 percent during his first term. The policy is also helping his electoral base — wages for several categories of blue-collar workers rose quickly while wages in the critical Minneapolis region rose by 5.2 percent.

But Trump’s “Hire American” policy has not helped the many professional, college-educated Americans who are losing jobs and careers to a flood of government-subsidized visa workers imported from Indian and Chinese colleges. In November 2018, many of GOP-leaning American college voters backed Democratic candidates instead of Trump’s GOP allies.

The foreign visa workers arrive via numerous visa programs, including the H-1B, OPT, CPT, L-1, TN, E-3, J-1, H4EAD, and O-1 programs. The huge annual inflow keeps an army of roughly 1.5 million visa-workers in U.S.-based jobs. Most of the visa workers will work long hours for low wages because they hope to get hugely valuable green cards for themselves — and their extended family — from the federal government.

This flood of foreign labor aids investors by lowering salaries for Americans graduates, many of whom need decent salaries to pay down their college debts, to buy homes, and to get their own children to get into college.

Despite his campaign promise, Trump’s deputies have failed to reform or narrow the H-1B program, even though he has lower poll ratings among GOP-leaning college graduate voters. In fact, in 2018, DHS officials even blocked a draft plan that would have pressured employers to hire fewer H-1Bs.

But on January 31, the DHS approved the new H-1B rules that will cut investors’ costs of hiring H-1Bs while raising the average education level.

The change was welcomed by FWD.US, a lobby group which was created by Silicon Valley investors, including Mark Zuckerberg and Bill Gates, to expand the inflow of cheap college graduate labor via the visa worker programs.

Jeb Bush’s tweeted his approval of the new cheap labor policy on February 1:

New H-1B rules would result in up to 5,340 more immigrants with a master’s degree or higher getting selected for a visa. A good change in policy. https://t.co/9gVT8cEOKH

Bush’s father, former President George H.W. Bush, signed the 1990 immigration act that tripled the annual inflow of Democratic-leaning immigrants up to roughly 700,000 per year. His brother — former President George W. Bush — helped create the OPT visa program, which keeps roughly 400,000 foreign graduates in U.S. jobs, and he pushed for amnesties that would have dramatically increased the inflow of foreign workers and consumers. Their policies boosted investors and persuaded Americans to place Trump in the White House.

“After two years in office, the Trump administration has finally released its long awaited H-1B regulations. These regulations might best be called ‘The Swamp Has Taken Over the Trump Administration.’ ” https://t.co/SGW5EG6PUv

John Miano, a lawyer who is suing to end some of the visa programs, wrote:

The big question is “What do these changes do for American workers?”

The answer: “Absolutely nothing.”

This is not unexpected given how Trump has isolated himself from ordinary Americans. He has purged his staff of those who were reaching out to American workers. Trump has not met with American workers since he was elected. Meanwhile, Trump has had frequent meetings with businesses and foreign interests seeking cheap, foreign labor. Given that environment, the type of do-nothing regulation that came out this week was practically inevitable.