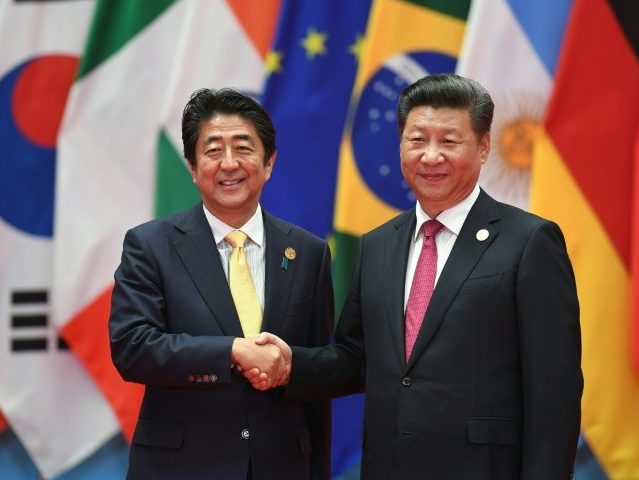 Chinese officials announced on Friday that Japanese Prime Minister Shinzo Abe will visit China from October 25 – 27, in concert with the 40th anniversary of the “Treaty of Peace and Friendship” signed by the two nations.

China touted Abe’s visit as heralding a major thaw in relations, and perhaps even a break between Japan and the United States over the issue of free trade.

The China-Japan Treaty of Peace and Friendship was a much-delayed and delicately negotiated effort to put World War II behind both nations, conceived at a time when both countries were maneuvering around the Soviet Union. The Soviets angrily accused Beijing and Tokyo of plotting a pan-Asian alliance against them. The Japanese cabinet secretary who shepherded the treaty through Tokyo was Shintaro Abe, father of the current prime minister.

Some things stay the same, however. Japan and Russia are still having some of the same arguments. If the 1978 peace treaty between Japan and China seems belated, consider that Japan and Russia still have not formally concluded World War II, and despite the stated desires of top leadership in both countries, the odds are against them putting it to bed in 2019.

The Chinese Foreign Ministry said it expects Abe’s visit to “elevate our bilateral ties and put bilateral cooperation back on the right track,” as the two countries “jointly uphold multilateralism and the free trade system.” This was widely interpreted as a dig at the Trump administration’s trade war against China.

The Japanese were a bit more guarded in their enthusiasm for Abe’s visit. “We hope to have open, frank discussions on not only Japan-China relations but also regional and international situations, including the North Korean issue,” said chief cabinet secretary Yoshihide Suga.

Abe faces some pressure from Japanese corporations looking to do business with China and he hopes to persuade the Chinese to remain on board with sanctions against North Korea, a task that falls largely on his shoulders as diplomatic relations between Washington and Beijing deteriorate.

On the other hand, the Japanese have serious territorial disputes with China, the Chinese have directed some intimidating military operations against Japan, and the Chinese government can rarely restrain itself from lecturing all other nations with interests in the East and South China Seas about respecting the growing power of Beijing.

Japanese tech corporations have good reason to be concerned about China’s track record of stealing intellectual property through cyber-espionage or demanding it as tribute from companies seeking access to the vast Chinese market. The Japanese public is unabashedly skeptical of China’s intentions, even as polls show people in each country thinking more highly of each other with every passing year.

Reuters on Friday quoted a Toyota executive who said the balance of Japanese sentiment is “shifting very fast, leading to more for us to do in China.” Japanese investment in China began rising again in 2017 after a five-year slump, while Japanese companies are eager to work with Chinese firms on lucrative projects in third countries.

This evidently includes China’s huge Belt and Road infrastructure project, which Japan has worked for years to counter with its own initiatives. The Chinese will carefully consider Abe’s remarks on Belt and Road to determine whether Japan plans “vicious competition” or “positive competition, or even cooperation,” as a professor from Beijing’s Renmin University put it to Reuters.

Japanese cooperation with Belt and Road would go a long way toward calming jittery Chinese partners and blunting American criticism of China’s initiative as thinly-disguised colonialism. A Japanese trade official assured Reuters that Abe will say nothing that would relax Japan’s high standards for work quality and transparency.

Relations between Japan and China have improved considerably since Abe came to office in 2012, but old resentments from the World War II era linger, and the Chinese still see Japan as their most formidable regional military adversary. The Japanese are deeply suspicious of Chinese aggressive military and economic posture and its support for North Korea, which remains the most urgent threat to Japanese security.

Relations between Japan and the United States, on the other hand, are in a strange place. Abe publicly gets along very well with President Trump and has been a staunch supporter of Trump’s approach to North Korea, but he also finds himself negotiating trade deals with a U.S. administration keenly interested in reducing trade deficits. Abe might value the leverage he could gain in Washington with a highly successful trip to China, sparking a bidding war for Tokyo’s affections.