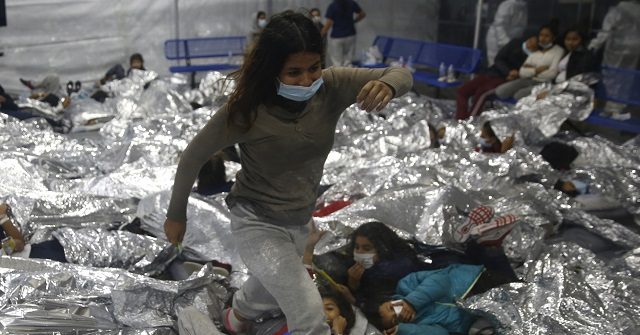 A Japanese news outlet released a video on Thursday showing a migrant child detention facility in South Texas they describe as being “close to breaking point.” The international news outlet blamed President Joe Biden for the conditions where 4,000 children are packed in a facility with a capacity of 250.

“President Joe Biden is under fire for the poor conditions,” NHK World News tweeted. “Children rest just inches from each other on mats.”

New footage of a US detention facility has revealed a system close to breaking point. pic.twitter.com/bgrrYV9laz

“The massive influx of people is said to have been triggered by the president himself,” the agency continued. “A sense of crisis appears to be spreading among officials.

NHK World News focused on the president’s decision to “overturn the policies of his predecessor and accept unaccompanied minors.”

The overcrowding in the facility in Donna, Texas, near the banks of the Rio Grande remains massively overcrowded despite the opening this month of 15,000 detention center beds by the U.S. Department of Health and Human Services (HHS) in March, Breitbart Texas’ Randy Clark reported.

On Thursday, HHS officials announced plans to open an additional child detention center at the National Association of Christian Churches in Houston. The newly opened facility will receive a shipment of 500 migrant children on Friday, officials said. The planned capacity of the facility has not been released.

This is the ninth facility opened by HHS officials in March, the article states.

Clark details the facilities as follows:

In addition to the newest opening announced in Houston, HHS has opened the following centers in March 2021 alone.