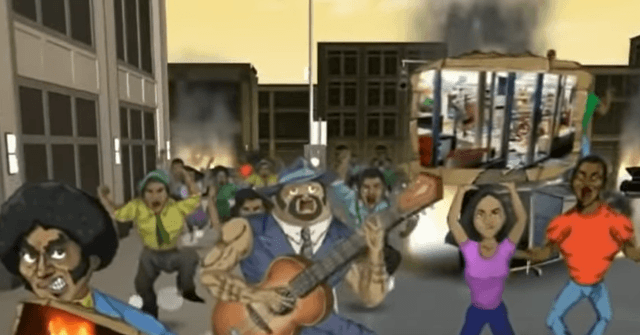 Japanese public broadcaster NHK issued an apology on Tuesday after deleting an animated video from its Twitter account that was meant to explain the anti-police protests rocking America, but instead caused outrage over its callous depiction of black people.

The animated video, which lasted around 80 seconds and was part of a 26-minute program explaining the reasons behind the violent demonstrations rocking America, showed a muscular black man talking in rough Japanese about wealth disparity between white and black Americans, as well as the impact of widespread job losses on black people as a result of the Chinese coronavirus pandemic.

However, the video made no reference to accusations of police brutality and the specific cause for the demonstrations, which was distressing footage showing the death of African-American George Floyd in police custody. Joseph M. Young, the interim Chargé d’Affaires of the U.S. Embassy in Tokyo, said Tuesday that the anime was “offensive and insensitive.”

“While we understand NHK’s intent to address complex racial issues in the United States, it’s unfortunate that more thought and care didn’t go into this video,” he said. “Learning about racial justice and equality is a lifelong endeavor. A great place to start is the ‘Talking About Race’ exhibit at the National Museum of African American History and Culture.”

Amid widespread criticism,  NHK confirmed they had removed the video from Twitter. “We at NHK would like to sincerely apologize for a computer animation clip posted on our Twitter account,” they said in a statement. “We regret lacking proper consideration in carrying the clip, and apologize to everyone who was offended.”

Japanese professional tennis player Naomi Osaka, who was born to a Haitian father and recently declared her support for the Black Lives Matter movement, also responded to the NHK post with a popular gif of Family Feud host Steve Harvey expressing bewilderment.

Over the past week, violent demonstrations in the United States have spread to other parts of the world, including the Japanese cities of Tokyo and Osaka. Despite the extremely low number of black people living in Japan, mainly as a result of their stringent immigration system that has kept it largely a monoethnic society, thousands of people took to the streets this weekend in both cities in solidarity with Floyd and the wider anti-police movement.