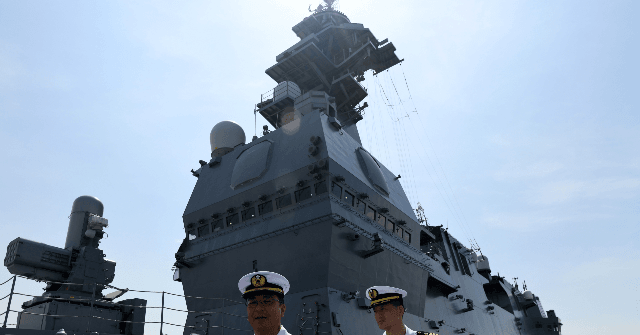 Japan’s largest warship, the Izumo, completed joint drills with allies including the U.S., France, and Australia this week, demonstrating Japan’s improved ability to project power across the region – pointedly including ground actions on islands like the ones China has been militarizing.

China just used those islands to conduct missile tests that a growing list of Asian powers found disturbing, as did the United States.

The Izumo was designed as a helicopter carrier, but it will soon undergo renovations that will allow it to launch advanced F-35 fighters, which require little runway space to take off and land. The UK Express noted that making such an extensive investment in the F-35 will further cement Japan’s military partnership with the United States, a sign of commitment that will not go unnoticed in Beijing.

The ship’s most recent cruise marked the first time troops from the new amphibious brigade of Japan’s Self-Defense Force participated in a prolonged naval deployment, a significant achievement for Prime Minister Abe Shinzo’s program to modify the pacifist constitution and grant the Japanese military greater initiative in defense.

Yasukazu Tanaka of the Amphibious Rapid Deployment Brigade, similar to the US Marines, said the recent exercises were meant to deepen coordination between them and ground troops to facilitate the use of the carrier for transporting troops to the front lines in the future.

Since the Izumo can accommodate both air and sea transport, “there are great possibilities for us to conduct amphibious operations,” he said, though he and all others involved emphasized that the ground and marine troops conducted no joint exercises.

Ground troops are still exploring how best to operate on longer missions, where regulations limit the use of live-fire weapons on board. Troops practiced emergency first aid response and trained on the flight deck and in the aircraft carrier hangar deck, at times using guns made of rubber in battle scenarios.

The Japanese navy has been training officers from allied Asian nations, with an advertised emphasis on peacetime navigation, rescue, and disaster relief operations.

“This Indo-Pacific deployment is not an operation that is aimed at any one specific country,” insisted the commander of the Izumo’s escort ships. However, the Izumo’s most recent voyage took it close to the notorious “nine-dash line,” the border China has unilaterally drawn to mark its claim across most of the South China Sea.

On the far side of that nine-dash line, China restricted a swath of contested ocean for five days of military drills that included some alarming anti-ship missile tests. The U.S. Defense Department upgraded its estimate of those tests from “concerning” to “truly disturbing” on Wednesday, describing them as a betrayal of Chinese Communist Party boss Xi Jinping’s 2015 promise to former President Barack Obama that China would not militarize the islands it was artificially enhancing at the time.

“I’m not going to speak on behalf of all the sovereign nations in the region, but I’m sure they agree that the PRC’s behavior is contrary to its claim to want to bring peace to the region and obviously actions like this are coercive acts meant to intimidate other South China Sea claimants,” said Pentagon spokesman Lt. Col. Dave Eastburn, referring to the People’s Republic of China.

One of those claimants is the Philippines, whose Defense Secretary Delfin Lorenzana promised on Wednesday to investigate reports of Chinese missile testing.

“We have no firsthand knowledge about this missile launch except this news report,” Lorenzana said. “We will conduct our own inquiry and will decide later what to do if proven correct.”

The Philippine government finds itself in an uncomfortable position with China as it attempts to draw a few red lines after years of generally accommodating Beijing. One of those red lines involves fishing rights, as the administration of President Rodrigo Duterte responds indignantly to China’s slow annexation of island waters that have been traditional fishing grounds for Filipinos.

Philippine Foreign Affairs Secretary Teodoro Locsin Jr. announced on Wednesday that Chinese fishermen will no longer be allowed to work inside the Philippine Exclusive Economic Zone. Locsin’s statement implied the Chinese have violated informal agreements made with President Duterte years ago.

Duterte on Tuesday demanded assurances from China that it will respect the “rights and safety of our fisherfolks” after a Chinese ship rammed and sank a Filipino fishing boat in June. The Chinese ship abandoned the Filipino fishermen, leaving them to be rescued by a passing Vietnamese ship.