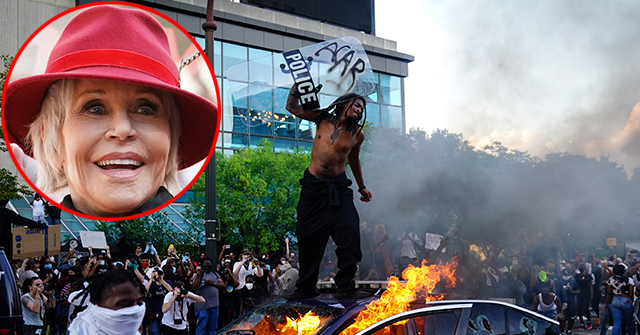 Actress and left-wing activist Jane Fonda has insisted that from what she’s seen, the majority of those taking to the streets in response to the police involved death of George Floyd by a white police officer are peaceful protesters young and old.

“I think it’s important for us to recognize that the media cameras may be focused on the breaking of windows and the burnings and the fires, but the vast majority of people at least in the cities where I talked to people and from what I have seen on tv, it’s non-violent,” said Fonda in an interview with CNN’s Don Lemon on Sunday.

The 82-year-old, who has spent much of her life attending protests dating back to her opposition to the Vietnam War, went on to say those protesting come from many different demographics, including the disabled and those walking their dogs.

“These are people who are white. They are Latino. They are old. They are young. They are in wheelchairs, they have children with them. They have dogs with them,” she continued. “And it’s organized. Black Lives Matter, color of change, they don’t want violence. I don’t know who the people are that are doing the violence, but I think what matters is that more and more white people are getting it.”

In reality, the protests referred to by Fonda more closely resemble rioting carried out by people affiliated with organizations like Black Lives Matter, Antifa, anarchists, and opportunistic criminals. The violence has wreaked havoc and destruction across American towns and cities, and in many cases against black-owned businesses and majority black communities.

There’s vandalism and looting of dozens of public and privately owned institutions, including the Lincoln Memorial in Washington D.C. There have also been countless acts of violence against innocent citizens and police, including some fatalities, although the number of those killed or injured remains unclear.