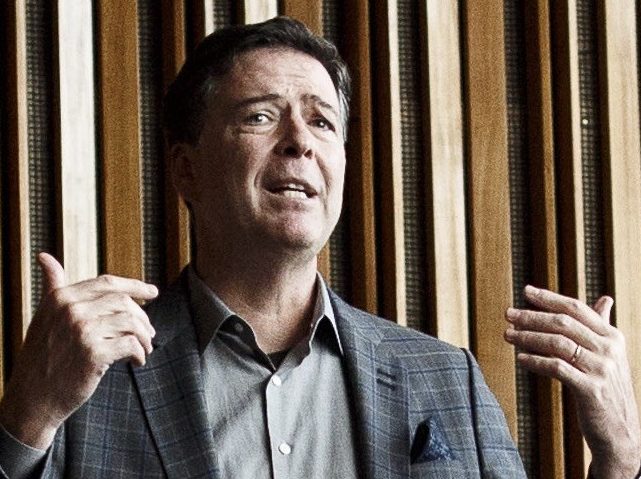 Former FBI director James Comey told an audience at the 92nd Street Y in New York on Sunday evening that voters should “use every breath we have” to defeat President Donald Trump in 2020 in a “landslide.”

Comey, who returned to Capitol Hill on Friday for closed-door testimony before the House of Representatives, has long been accused of interfering in the 2016 presidential election: first to protect Hillary Clinton from prosecution for storing emails with classified information on an illicit private server and destroying them; and then to defend the legitimacy of the presumed Clinton presidency by re-opening the investigation with days to go before the vote.

Since being fired by President Trump in May 2017, Comey has emerged as one of Trump’s most vociferous critics, vindicating those who saw the FBI as having become too politicized under his leadership, and adding weight to suspicions that the agency may have intervened in the 2016 election and spied on the incoming administration.

According to CNN, Comey — interviewed by MSNBC’s Nicole Wallace, a former Republican operative turned anti-Trump talking head — said that he would not want to see Trump impeached, because that would convince Trump supporters that the president had been deposed in a “coup.” He also declined to call Trump an “unindicted co-conspirator” in crimes charged against his former lawyer, Michael Cohen, including campaign finance violations.

Earlier in the day, Trump had accused Comey of giving evasive answers to Congress, and setting “a record for who lied the most to Congress in one day,” responding to reports that Republicans were unhappy with his testimony.

Comey praised Trump’s predecessor, Barack Obama: “I was struck that Barack Obama is the best listener as a leader I had ever seen and Donald Trump is the worst I’ve ever seen,” he told the Upper West Side audience.

Competing with Comey to offer evidence that the country’s intelligence and law enforcement services may have been irredeemably biased against Trump was former CIA director John Brennan, who predicted that Trump would face “justice” and “never have the opportunity to run for public office again,” though he is seeking re-election.

Whenever you send out such inane tweets, I take great solace in knowing that you realize how much trouble you are in & how impossible it will be for you to escape American justice. Mostly, I am relieved that you will never have the opportunity to run for public office again. https://t.co/JzB6YH8C6H