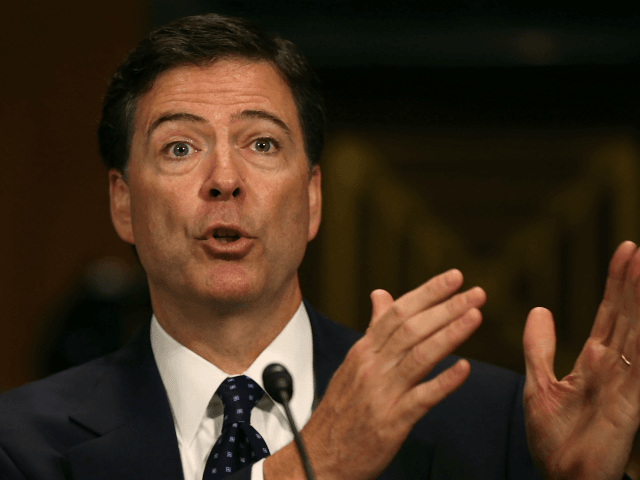 In what could become a possible issue for James Comey, the former FBI director repeatedly stated in testimony to the House Judiciary Committee that he “never” knew the author of the infamous anti-Trump dossier had been retained to do his work by a U.S.-based law firm.

Comey made his remarks during testimony on Friday Here is a transcript of the relevant portions of Comey’s latest testimony as it relates to Perkins Coie:

Mr. Gowdy:  When did you learn that Fusion GPS was hired by Perkins Coie?

Mr. Comey:  I never learned that, certainly not while I was Director.

Mr. Gowdy:  Well, when did you learn the DNC had hired Perkins Coie?

Mr. Comey:  I never learned that. Again, while I was Director. I think I’ve read it in the media, but, yeah, even today, I don’t know whether it’s true.

Mr. Comey:  No, I don’t think so. I don’t have any recollection of being told that or reading that or learning that while I was Director.

Later in the testimony, a skeptical Mark Meadows (R-NC) asked Comey to explain his claim that he didn’t know Steele was being paid via Perkins Coie considering testimony from Comey’s own legal counsel, FBI official James Baker, that Baker was contacted by an attorney for Perkins Coie and was provided documents related to the Russia probe.

Here is the relevant portion of that testimony:

Mr. Meadows: Let me ask one clarifying question, if you don’t mind. Director Comey, you were saying that you had no knowledge that Perkins Coie was actually involved with the Democrat National Committee and involved in this particular investigation that ultimately was initiated. Is that correct?

Mr. Comey:  I, when I was FBI Director, don’t remember ever being told anything about Perkins Coie. I think I’ve since read stuff in the media, but not when I was Director.

Mr. Meadows:  So are you saying that James Baker, your general counsel, who received direct information from Perkins Coie, did so and conveyed that to your team without your knowledge?

Mr. Comey:  I don’t remember the name Perkins Coie at all.

Another issue for Comey is that the former FBI director also stated in the same testimony that he was aware the dossier was financed by Democrats who opposed Trump. According to Democratic and Republican House Intelligence memos, however, that information was not specifically included in the FISA application, which in part relied on Steele’s work to obtain warrants to monitor Page.

Asked about his knowledge of Steele’s political patrons, Comey told the House Intelligence Committee on Friday:

The former FBI director was also asked whether he learned about political actors financing Steele “before there were any court filings” — a clear reference to the FISA application, which Comey first signed in late October 2016.

Comey’s FISA application to conduct surveillance did not specifically state that the FBI had information that Steele was being paid in connection with any U.S. political party, according to House documents.

A House Intelligence Committee memo released last February documented that as FBI director, Comey signed three FISA applications to spy on Page with the dossier serving as part of the basis for the warrant requests.

That detail was further confirmed when the Trump administration released a redacted version of the FISA applications last July.

The statement in Comey’s FISA application that “the FBI speculates” that Steele “was likely looking for information that could be used to discredit” Trump’s campaign is a far cry from informing the court that the dossier utilized in the FISA warrant was paid for by Trump’s primary political opponents, namely Clinton and the DNC.