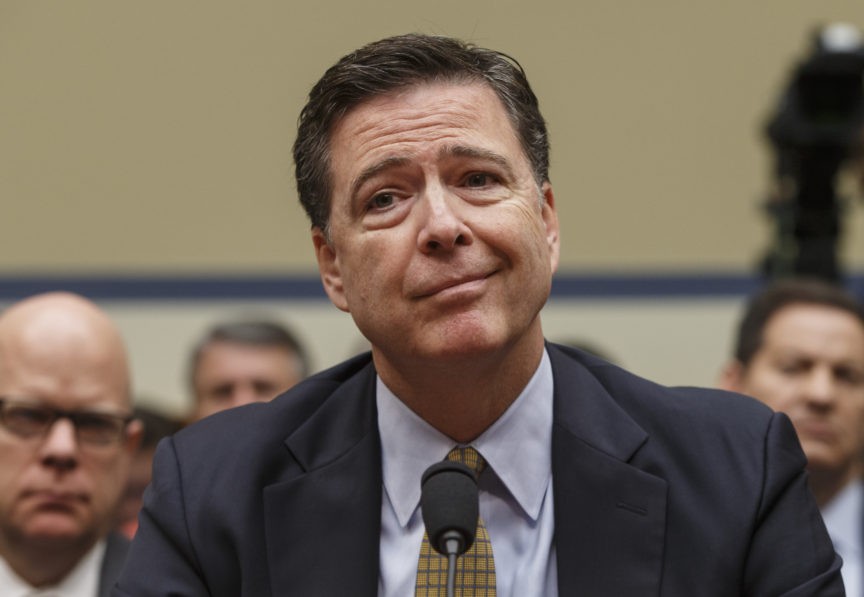 The transcript of former FBI Director James Comey’s closed-door Friday interview with the House Judiciary Committee was released Saturday. An admission by the fired deep-stater appears to confirm a belief Republican investigators have held since President Donald Trump was elected to the White House: The FBI failed to adequately verify the anti-Trump dossier used to surveil Trump campaign members during the 2016 presidential election.

Comey told investigators that the anti-Trump dossier authored by longtime British intelligence agent Christopher Steele was largely unverified before and after a FISA warrant was obtained to surveil Trump campaign adviser Carter Page, according to a report.

The towering ex-FBI boss confessed that the FBI had not corroborated much of the Steele dossier before it was submitted as evidence to a secret court to support a Foreign Intelligence Surveillance Act (FISA) warrant to spy on Trump campaign adviser Carter Page in the final weeks of the election.

And Comey admitted much of the dossier remained uncorroborated more than six months later when he was fired by President Trump.

The former FBI director said the anti-Trump dossier “was coming to us from a reliable source with a track record, and it’s an important thing when you’re seeking a PC warrant,” concerning Steele.

“But what I understand by verified is we then try to replicate the source information so that it becomes FBI investigation and our conclusions rather than a reliable source’s,” he told Republicans. “That’s what I understand it, the difference to be. And that work wasn’t completed by the time I left in May of 2017, to my knowledge.”

The original FISA warrant application submitted in October 2016, along with the three 90-day renewal, were labeled “Verified application,” as reported by National Review’s Andrew C. McCarthy. “The FBI has reviewed this verified application for accuracy in accordance with its April 5, 2001 procedures, which include sending a copy of the draft to the appropriate field office(s),” the applications read.

Along with being unaware of the dossier’s veracity, Comey did not know that Bruce Ohr, the Justice Department’s fourth-highest ranking official before his demotion last year, was a go-between for collecting so-called intelligence from Steele after the FBI terminated its relationship with the agent for alleging leaking information to the media. Further, Solomon reports that Comey could not recall that Steele’s relationship with the bureau had even been terminated.

“His memory was so bad I feared he might not remember how to get out of the room after the interview,” an unnamed congressman told Solomon. “It was like he suddenly developed dementia or Alzheimer’s, after conveniently remembering enough facts to sell his book,” said another.

Not only did Comey claim repeatedly he was unaware of key details concerning Steele and the dossier, but was “instructed” by his lawyers, including one who belonged to the Justice Department, to answer questions regarding the two hot button matters, along with FBI’s investigation into Hillary Clinton’s mishandling of classified information.

“One of the disappointments of this deposition so far has been the amount of times in which the FBI believes that Congress doesn’t have a right to know,” Rep. Darrell Issa told reporters, according to Fox News. “The Department of Justice is going to have to agree to allow him to come back and answer a great many questions that currently he is not answering.”

Friday’s closed-door sessions could be one of the last chances Republican investigators will have to grill Comey as part of their investigation into the FBI and Justice Department’s decision-making process during the 2016 election. Speaking to reporters Friday, incoming House Judiciary Committee chair Jerrold Nadler (D-NY) said he would shut down the probe, claiming its aim is to distract from special counsel Robert Mueller’s Russia investigation.

House Judiciary Committee Chairman Bob Goodlatte (R-VA) and House Oversight and Government Reform Committee Chairman Trey Gowdy (R-SC) announced the joint probe into the Justice Department’s actions during the election. The committees have sought answers to why the FBI chose to go public with the Clinton email probe and further details surrounding her eventual exoneration.