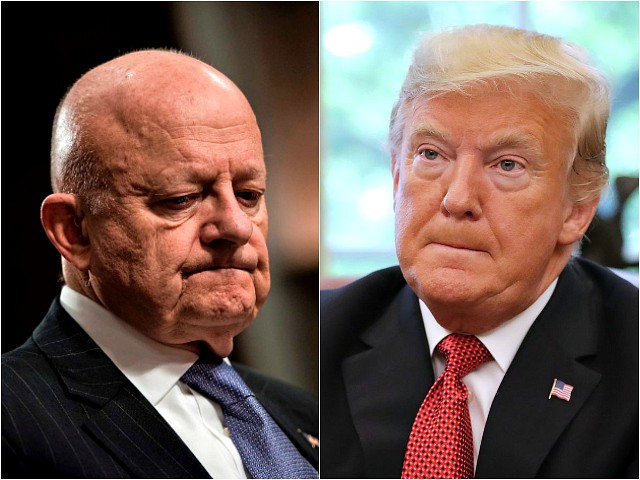 Former Director of National Intelligence James Clapper credited President Donald Trump with contributing to an “environment” which led to last Saturday’s mass murder of Jews at a synagogue in Pittsburgh, PA. He made his comments on Wednesday during a panel discussion at George Mason University in Fairfax County, VA.

GOLDBERG: Do we think this is the end of it or do you think we’re in the middle of a long process in which people are being radicalized and are going to try to carry out their anger in violent ways?

CLAPPER: Regrettably, yes. I think we’re probably in for more of this sort of thing. … This is how people get energized, radicalized. It’s not unlike what I experienced with the life of ISIS [Islamic State] who was very successful using social media only to recruit and radicalize people, and it’s almost a very similar psychology at work, here.

As long as our “stable genius” creates an environment that seemingly condones this sort of behavior, we’re going to have more of it. I’m convinced.

Hayden similarly accused Trump of advancing anti-Semitic narratives that echo the motives for the mass murder of Jews.

Hayden said, “For political dissidents … they now have a set of grievances to which they can attach themselves which have been essentially articulated by the President of the United States of America.”

Hayden then said the Trump administration traffics in neo-Nazi narratives regarding “international Jewry”:

If you look at the incident in Squirrel Hill in Pittsburgh, there is a  latent anti-Semitism, but the proximate cause was his belief that international Jewry was sponsoring the invasion of America from that caravan still a thousand miles from the Rio Grande which has been a constant theme coming out of the White House.

Goldberg offered no challenge to either Clapper’s or Hayden shared analysis. He markets himself as a politically objective and non-partisan news media figure.

Titled, “Threats to Freedom and Democracy,” the discussion panel was ostensibly focused on national security. Goldberg asked no questions about Islamic terrorism, choosing instead to ask about “Russian meddling” in U.S. politics and Robert Mueller’s investigation of Russia “interference” in 2016’s presidential election.

Clapper and Hayden now both work for CNN as analysts.

In 2016, then-President Barack Obama framed Trump as a boon for Islamic terrorism, saying, “I think the kinds of rhetoric that we have heard too often from Mr. Trump and others is ultimately helping to do ISIL’s work for us.”