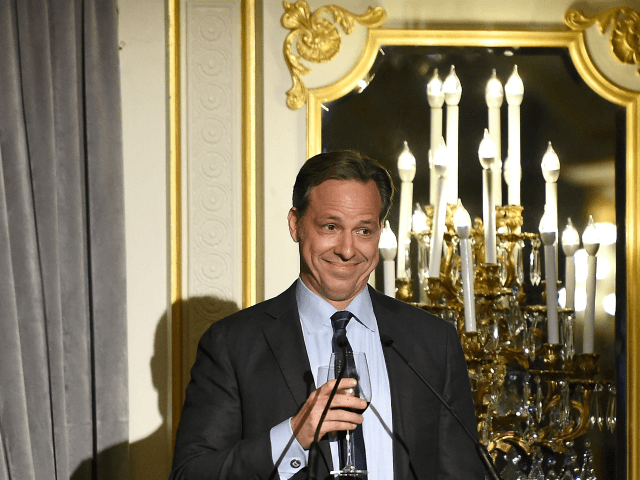 “Old enough to remember coverage and outrage about former President Clinton visiting on a plane with then-AG Loretta Lynch in the midst of an investigation into his wife,” Tapper tweeted Monday with a link to a story about Trump meeting with Rosenstein on Air Force One.

Tapper, the embattled afternoon anchor at the far-left CNN, has launched some bizarre attacks against Trump in the past, but here he is actually spreading the fake news that a secretly arranged meeting between a former president and a sitting Attorney General — while that former president’s wife is running for president under the cloud of an FBI investigation — is somehow equal to Trump not meeting in secret with a subordinate.

Obviously, the meeting between Trump and Rosenstein is a private one, but there is nothing secretive about it. The arranging and scheduling of this meeting has been publicized for two weeks. What’s more, there is nothing at all odd about a sitting president meeting with his deputy attorney general, especially after there have been news reports about the former’s disloyalty.

Moreover, while the scheduling of the meeting with Rosenstein was public, we would not have ever known about the secret Lynch-Clinton meeting were it not for a local reporter who caught on to what was going on.

The ridicule Tapper was hit with was not at all surprising:

Jake How can you even compare the two. To start with the Lynch meeting was sneaky and secret until a local reporter blew it open. Second Rosenstein is Trumps deputy director. He’s his employee. #areyoulosingyoutgrip?

Ummm……. do you not understand the difference? If you don’t please study up a bit on how our government works. Thank you!

Some days you are smart but most days you are the dumbest person in the world. There is a HHHHHHHHHUUUUUUGGGGGEEEE difference. Clinton hasn’t been president for decades and just happens to meet with AG as his wife is being investigated. To talk family and stuff.

Do you even realize this is an idiotic statement? Or do you say this because you count on influencing low information liberals

This is called a reach.

And on and on it went…

Rather than retract his fake news of a correlation, about 90 minutes later, Tapper only made it worse with this cryptic explanation:

“Some folks noting difference in that Rosenstein reports to Trump (true),” Tapper tweeted, adding “while failing to acknowledge the impropriety chasm between what we may suspect re Clinton/Lynch and what President Trump says and does out in the open re the Russia investigation.”

The ratio only got worse:

Heavens to Betsy! The President met with his employee? Muh Collusion!!!
And remember the part where the Mueller team said the President wasn’t under criminal investigation? Pepperidge Farm remembers….

Once again this goes to show why So many people question CNN credibility. Misleading stories, fake comparisons. Once 2025 arrives and Trump’s no longer president CNN rating will be down once again

This was your 2nd take at this and you are still not clever. This is a sign that you should not have tweeted in the first place. And what the heck is an “impropriety chasm”?

@jaketapper “Some folks” noting…..
Fake news standard line. They think it gets them everywhere w/o accusing anyone.

The left-wing Tapper, who continues to flounder in last place at 4 p.m., is one of CNN’s most strident and unapologetic anti-Trump activists.

Last week Tapper faced criticism for saying “We’ve heard from men enough” during the bitter Supreme Court confirmation battle over Brett Kavanaugh. Three weeks ago, Tapper devoted an entire segment to Trump’s penis. Back in February, Tapper remained silent as his audience booed a rape victim for purchasing a gun in self defense.