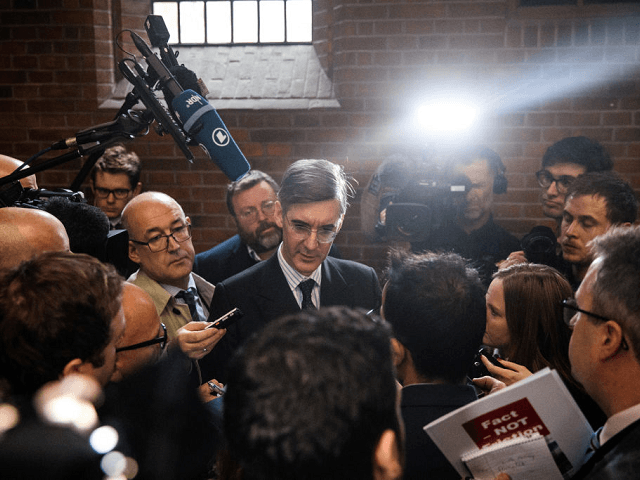 Key Brexit backbencher Jacob Rees-Mogg has called for political leaders from all factions and opinions on Brexit to maintain the trust of the British people in political processes by delivering on Brexit as promised.

Speaking Sunday, the high-profile member of Parliament blasted the European Union as a “failed political model” and accused unsuccessful leftists of using globalist organisations like the European Union to implement policies they would be unable to win votes for at home.

Jacob Rees-Mogg: “The Prime Minister must either govern or quit” https://t.co/pbdain5bj2

Mr Rees-Mogg said: “The hedge fund managers didn’t vote for Brexit, they voted for remain. It is people up and down this country, 17.4 million for voted. If you want tougher regulations… win an election and implement them… this is the failure of ambition for the Labour party.

“You think you can’t win elections, so you must get Europe to implement regulations that you like.

“This should be done by you domestically because you may not be able to win elections… No taxation without representation, an important principle.

“That is broken in [Theresa May’s] agreement, because the EU can set minimum tax rates for this country. This is very good for them, it protects their inefficient businesses… minimum VAT rates maintained being set by the European Union, on domestic fuel, ladies sanitary products, and so on.”

Clashing with fellow members of Parliament at a televised debate organised by Britain’s Channel Four television, Mr Rees-Mogg said: “This is about trust. Before the referendum, all sides agreed they would abide by the result and they would implement it… Just imagine if it had been a remain result. Would we be talking about a hard remain or a soft remain? No, we would simply have remained.

“The same should apply to Brexit. People voted for it, and it should be delivered… The issue today is trust. Will politicians do what they promised, or will they run away from their policies.”

Quoting the details of Theresa May’s “worst ever deal” Brexit agreement to other members of the panel, Rees-Mogg made the point that despite the claims of the government the deal would only be a Brexit in name only, saying: “If you look at article 174, it gives supremacy to the European Court of Justice.

“When you look at article 4 it says the agreement will be superior law in the UK in the exact same way as all the previous Europe treaties have been. That cannot mean we are taking back control of our laws. There are 64 pages of laws that will apply in Ireland that will be adjudicated and made by the European Union. We will have no say in that 68 pages of rules.”

Theresa May supporter James Cleverly tackled Rees-Mogg on his claims, pointing out that the European Union’s long-term control of the United Kingdom would only run as long as the much-criticised backstop. But Rees-Mogg hit back: “The backstop isn’t temporary. The attorney general has said in the advice that parliament pulled out of him, like pulling a tooth, in that evidence he said the backstop could be permanent, there is nothing in the treaty or international law to end it.”

Green Party, 1987: “We are opposed to the Common Market as presently constituted.” https://t.co/BhKRYRpWFf

A constant feature of the debate was Green party co-leader Caroline Lucas calling for a second referendum to overturn the results of the first. While claiming this was nothing to be afraid of and a simple expression of democracy, she revealed if the vote were to go ahead those organising it wouldn’t even consider allowing a ‘full Brexit’ option on the ballot paper, saying that would be “reckless”.

Rees-Mogg rejected the idea, stating there had already been three votes on Brexit — two general elections and a referendum — and that another referendum would be nothing but “a losers vote”.