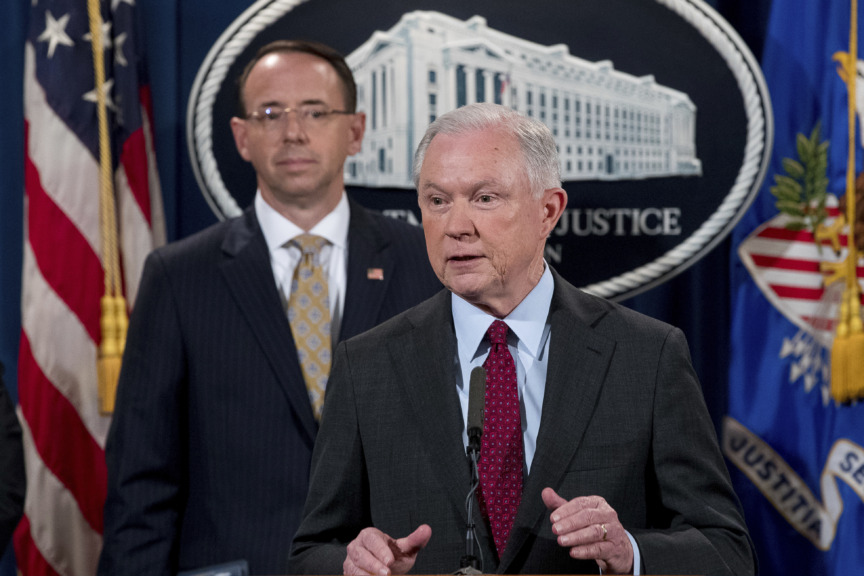 J. Christian Adams, a former Department of Justice (DOJ) official, told Breitbart News Tonight that President Donald Trump’s next attorney general should be someone with DOJ experience who knows what needs to be done to clean up the department’s institutional corruption.

Adams recalled, “I go back to the original press conference where Sessions recused himself [from overseeing Special Counsel Robert Mueller’s Russia collusion investigation]. If you were to go watch that, you would see something very interesting happen. He immediately referred to his chief of staff, Jody Hunt. I know Jody Hunt. I’ve had some dealings with him. … [Session] said how Jody Hunt is a long-time career employee at the Justice Department, and he almost used him like a prop, like, ‘Hey, look how fair and impartial I am because Jody Hunt is here.’ Jody Hunt survived the Obama years. He was a top leader inside the Holder Justice Department, and the way Sessions [put] Jody Hunt out there at that presser really disturbed me, because it told me that Jody Hunt had an inordinate amount of power inside the attorney general’s office.”

Adams explained that the problems with the Mueller investigation started with the decision to have Deputy Attorney General Rod Rosenstein oversee it, because, according to Adams, Rosenstein’s deputies are “leftists” who aggressively shielded Mueller’s probe from accountability.

Adams said, “Rosenstein gets appointed and Rosenstein effectively runs the Mueller investigation, and I have sourcing inside Rosenstein’s world and office that basically [confirms that] all these deputies inside of Rosenstein’s office who are leftists, Soros fellows. Literally, one of them is a Soros scholar, and they essentially had sharp elbows, and any time anybody tried to do anything to that [Mueller] investigation — basically make it behave, not even shut it down, but make it play by the rules — these guys would kick and scream and threaten, and that’s really where the problem was. By August [the Mueller investigation] was untenable, because Rosenstein had been given too much freedom.”

Adams said the key to cleaning up the Justice Department’s excesses is for Trump to appoint someone who understands the institutional problems within DOJ and can therefore reform it and root out the “careerists” who are not truly “Constitutionalists.”

Adams added, “You also can’t have some top lawyer guy from Manhattan. That would be a disaster. It has to be somebody who has Jeff Sessions’s ideological compass [and] experience inside the department and is willing to kick things around. I think that’s the most important criteria.

“I’m very nervous about who Trump is going to pick,” Adams said. “His instincts can be genius sometimes, and his instincts can be squarely off. … Where this pick goes is really going to dictate a lot about what sort of anti-Holder/Obama world we are going to live in at the Justice Department.”

Adams continued, “If I was the president, I’d pick [Texas Congressman] Louie Gohmert. I’d pick someone out of the Freedom Caucus on the Judiciary Committee to do it in a safe House seat. Maybe a Sen. Ted Cruz, that would be another one. Of course that won’t happen, but you get my point, you need someone like that who basically knows the mischief of the last eight years under Holder and knows what needs to be done.”

Adams also highlighted the conflict of interest inherent in the appointment of Deputy Attorney General Rod Rosenstein to oversee the Mueller investigation.

“[Rosenstein] was signing off on affidavits for FISA warrants, so he’s a witness to things, but it’s worse than that,” said Adams. “Rosenstein is a guy who’s never worked in the private sector as far as I know. He’s a longtime lifelong bureaucrat. How he got appointed — I’d love to see Breitbart do a story on that one — how he got appointed to be the deputy attorney general, because that’s really the source of all these problems, is that transition decision to appoint Rod Rosenstein the number two.”

Adams stated, “I think [leftists and Democrats] are afraid that Rod Rosenstein is the next to go. If he goes, then really all bets are off with Mueller. … They’re going to give a directive. Matt Whitaker, who is acting attorney general, is going to say, ‘You need to do your report now, or you’re done.’ I think that’s where this is headed.”

“Let’s say [Sessions] has done a hundred things. Ninety-nine of them are exactly right, and it’s this. … The slush funds. These were civil rights settlements that the Holder Justice Department was extracting from big banks. These were hundreds of millions of dollars in settlements, and the Holder Justice Department was forcing payments from these settlements to go to left-wing activists organizations. Literally filing their bank coffers with cash so then they could agitate with their Alinsky agitation. That’s just one of the many things that Sessions stopped.”

“It’s the most powerful agency in the entire federal government,” said Adams. “There is no other agency that has control over the things that they do: school, police, voting, drive-in theaters, movie theaters, education, prisons, mental institution, disability, service dogs on airplanes; literally there’s a laundry list of about 200 things in daily life; Kindle, whether or not something’s in braille or has closed captions. … The radicals in the civil rights division — housing lending, car loans — use the civil rights division to fundamentally transform America. So what they did was bring in hundreds of radical lawyers, we’ve got their resumes, and just filled the place with lunatics, and they’re still there.”