The population of illegal migrants is roughly 22 million, or twice the establishment estimate of 11 million, say three professors from Yale University and the Massachusetts Institute of Technology.

The shocking estimate will force establishment politicians and pro-migration advocates to recalculate the estimated impact of the huge illegal population on wages and salaries, on crime rates, welfare consumption, rental and real-estate prices, productivity rates, and the distribution of job-creating investment in coastal vs. heartland states.

The higher illegal population estimate helps explain why Americans’ wages and salaries have risen so little amid apparently low unemployment rates, and it also undercuts companies’ loud demands for yet more immigration of foreign workers, consumers, and renters.

The population estimate also raises the political and economic stakes of any amnesty legislation. In 2014, public opposition blocked the bipartisan, establishment, media-boosted Gang of Eight bill, which claimed to offer an amnesty to just 11 million migrants. For example, advocates for a ‘Dream Act’ amnesty say it will provide green cards to roughly 3 million sons and daughters of illegal immigrants.

“Our purpose is to provide better information,” said Jonathan Feinstein, an economics professor at Yale. In a video statement, he defended the estimate from likely critics, saying it is an expert analysis, not a political project:

This paper is not oriented towards politics or policy. I want to be very clear. This paper is about coming up with a better estimate of an important number, and we are really trying in this paper to keep away from making any statements about how that could or should be used. It is just a paper to help the debate be organized around some better information, which in my opinion is a good thing to do. I think the debate should always be centered around the best information we can develop.

The academics expected their techniques to show the population is smaller than the consensus estimate of 11.3 million. “Our original idea was just to do a sanity check on the existing number,” said Edward Kaplan, operations research professor at Yale. “Instead of a number which was smaller, we got a number that was 50 percent higher. That caused us to scratch our heads.” 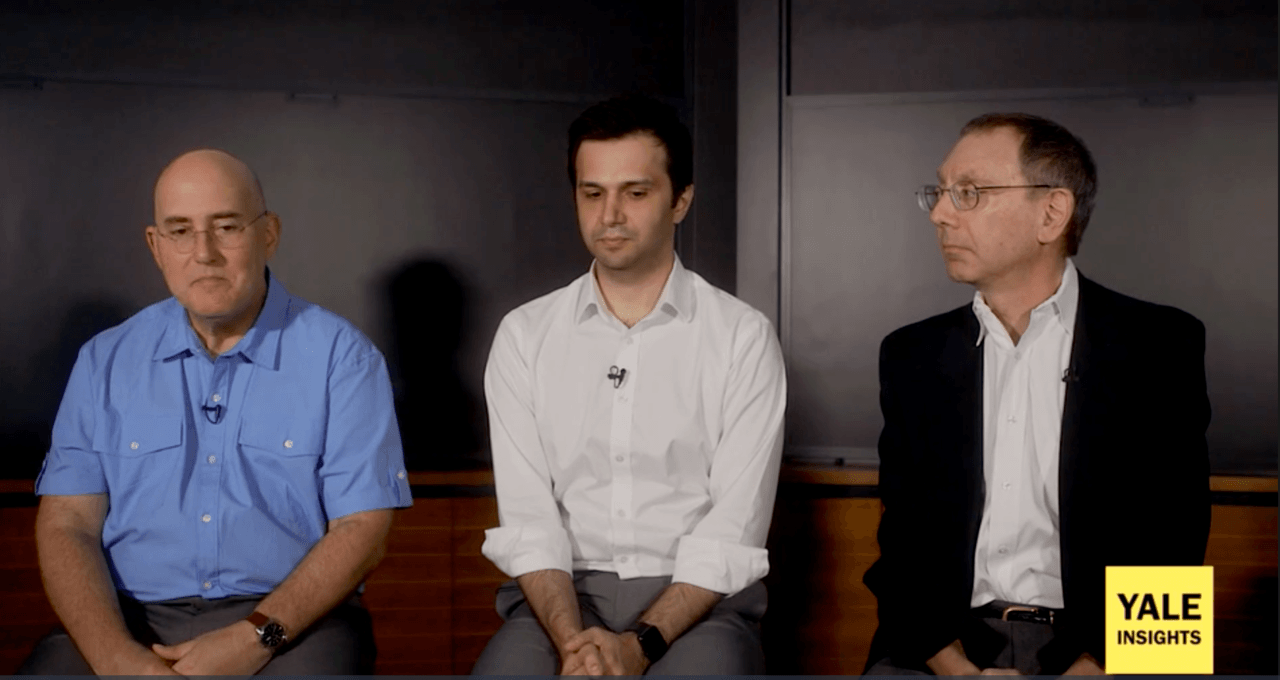 Operations research is a skill that extracts accurate estimates from scraps of data. It began in World War II when academics were enlisted to help track Nazi U-boats and weapons-production. For example, the academics used disparate information to conclude that the Nazis produced 270 Panthers in February 1944, which was very close to the actual production of 276 tanks.

“We have a conservative estimate that the number is at least 16.7 million,” said Edward Kaplan, an operations research professor at Yale. The study used “over 1 million scenarios accounting for all of the variability in the various parameters that we need for this model, on average we’re estimating something like 22 million undocumented immigrants in the United States.”

The figure [below] also shows our conservative estimate of 16.7 million in Red, and the most widely accepted estimate heretofore of 11.3 million in Blue on the far left. We note that this last estimate is for 2015, but should be comparable since both the estimates based on the survey approach and our modeling approach indicate that the number of undocumented immigrants has remained relatively constant in recent years. Finally, the mean estimate of 22.1 million is shown in black in the center of the distribution. 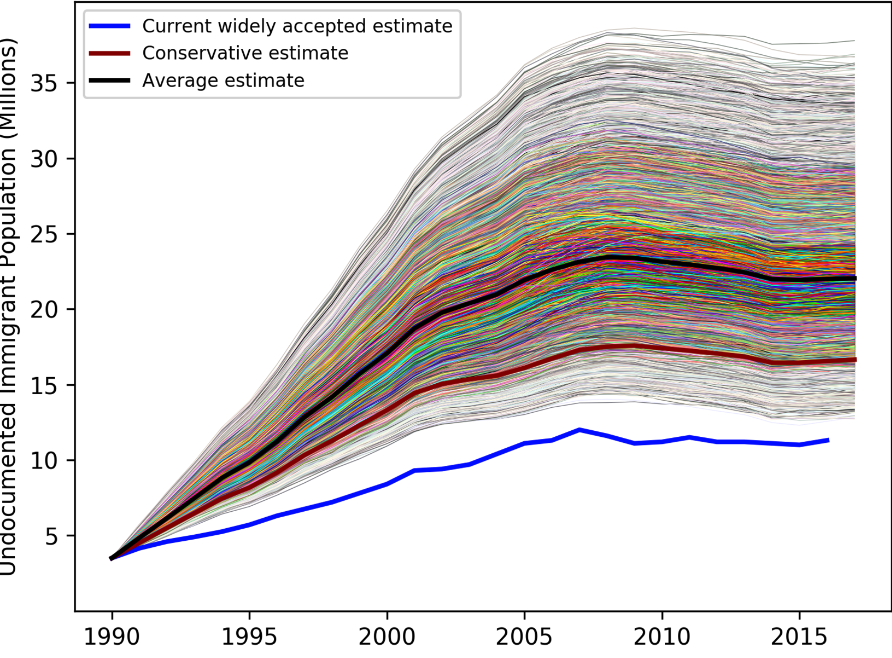 The new estimate uses new sources of data, such as fingerprinting of migrants caught at the Mexican border, says Mohammad Fazel‐Zarandi, a senior lecturer at the MIT Sloan School of Management. In contrast, the current estimate of 11.3 million is based on the Census Bureau’s annual American Community Survey. “It’s been the only method used for the last three decades,” says Fazel‐Zarandi.

The estimated illegal population is higher than expected because more migrants crowded into the United States during the cheap-labor policies of Presidents’ George H.W. Bush, Bill Clinton, and George W. Bush.

The inflow leveled off in 2008 once the economy crashed when millions of new migrants and poor Americans were unable to pay their rising mortgage costs.

The existing population of illegals tends to decline as many die of natural causes, or return home and or get “Adjustment of Status” to become legal residents. But the population is being kept level because new migrants — especially foreigners who overstay their visas or migrate from Central America — are offset the natural decline.

The Yale study goes up to 2016, and so does not offer 2017 and 2018 numbers. Many new migrants are overstaying their visas and sneaking across the borders, but President Donald Trump has tightened border defenses against overstays and border-crossers.

That number is roughly 16.9 percent of the population, or roughly one person six living in the United States. 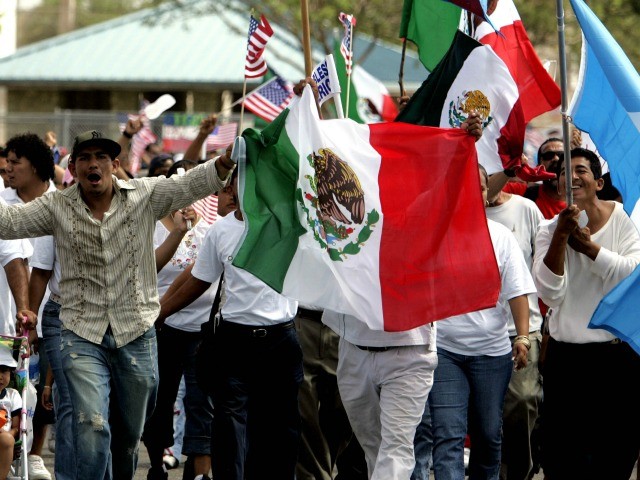 The study does not examine the impact on white-collar workers. That calculation is difficult because academics have not counted the number of resident white-collar visa-worker, such as L-1 and H-1B visa holders. Breitbart News estimates that U.S. companies employ roughly 1.5 million white-collar visa workers in jobs that are sought by U.S. college graduates.

Four million young Americans will join the workforce this year, but the federal government will also import 1.1 million legal immigrants, and allow an army of at least 2 million blue-collar and white-collar visa-workers to work U.S. jobs, alongside asylum-claiming migrants and illegal aliens. 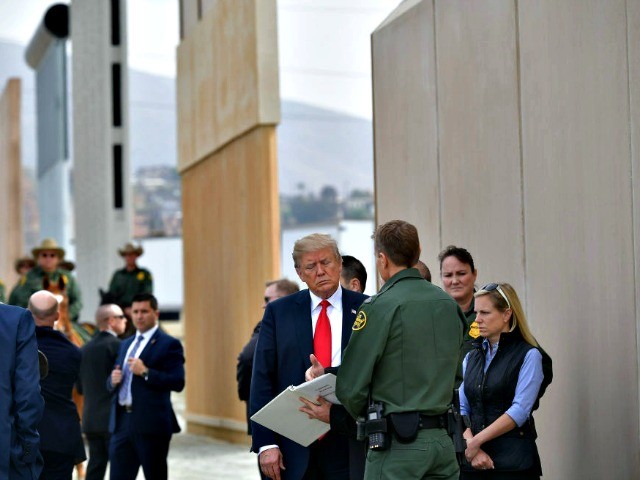