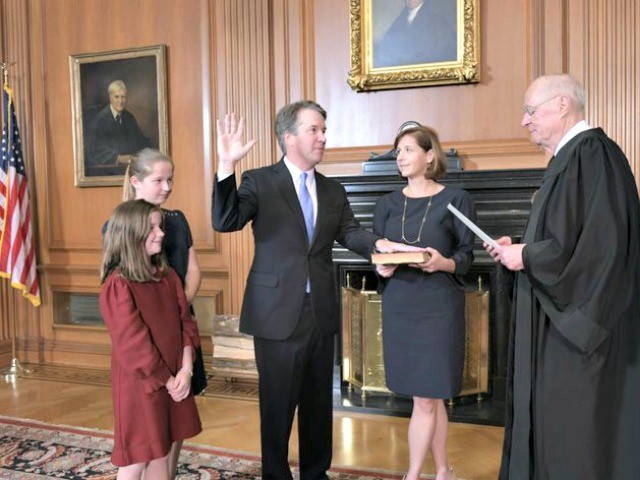 Brett Kavanaugh was sworn in as a Supreme Court justice Saturday night after the Senate confirmed the judge 50-48. The Senate vote delivered an election season triumph to President Donald Trump that could swing the court rightward for a generation.

Kavanaugh was quickly sworn in at the court building, across the street from the Capitol, while protesters chanted outside.

The quick swearing in enables Kavanaugh to begin work immediately in advance of arguments at the court Tuesday in two cases involving prison sentences for repeat offenders.

Kavanaugh’s wife and two daughters were next to him as he was sworn in. Four other Supreme Court justices were also in attendance: Clarence Thomas, Ruth Bader Ginsberg, Elena Kagan and Samuel Alito pic.twitter.com/DgyEiA1qdL

The court says Kavanaugh took the oath required by the Constitution and another for judges that is part of federal law in the same room where the justices meet for their private conferences.

The 53-year-old justice’s wife, children, and parents were in attendance.

The near party-line Senate vote, capped a fight that seized the national conversation after claims emerged that Kavanaugh had sexually assaulted women three decades ago — which he emphatically denied. Those allegations magnified the clash from a routine Supreme Court struggle over judicial ideology into an angrier, more complex jumble of questions about victims’ rights, the presumption of innocence, and personal attacks on nominees.

Acrimonious to the end, the battle featured a climactic roll call that was interrupted several times by protesters in the Senate galleries before Capitol Police removed them. Vice President Mike Pence presided over the roll call, but his potential tie-breaking vote unnecessary.