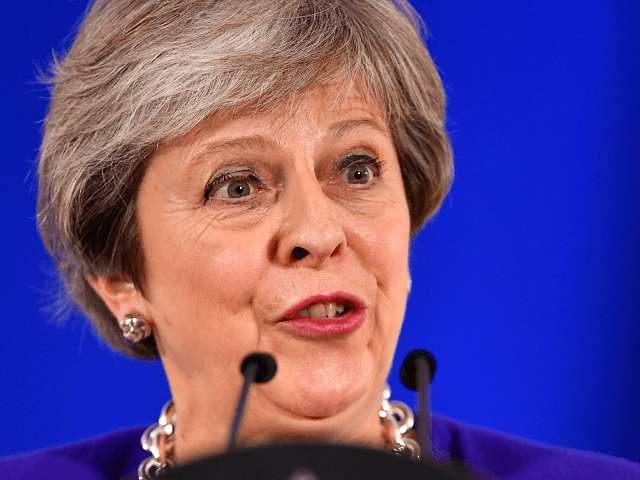 MPs from both the Brexiteer and EU loyalist wings of the Tory Party are turning on Theresa May over her “chaotic” mismanagement of negotiations with the bloc.

The Prime Minister campaigned against Brexit during the 2016 referendum and has made concession after concession to Brussels, but the bloc has still stonewalled her on the border between the British province of Northern Ireland and EU member-state the Republic of Ireland.

Eurocrats are insisting that, in order to keep the border free of customs infrastructure, the United Kingdom must agree a so-called ‘backstop’ which would leave Northern Ireland inside the EU’s Customs Union and, to an extent, its Single Market.

This would entail establishing an economic border of sorts between Northern Ireland and the British mainland in the Irish Sea, and is unacceptable to Northern Ireland’s Brexit-supporting Democratic Unionist Party (DUP), which cannot be easily ignored due to Mrs May relying on them for her parliamentary majority.

The Prime Minister has proposed a backstop which would keep the whole United Kingdom in the Customs Union instead — a compromise already deeply unpopular with her Brexiteer MPs, as it would leave the country under the EU’s thumb on trade and regulatory policy to a great extent.

She has been rebuffed by the European Union, however, and has now proposed — without prior consultation with her Cabinet — to extend her so-called ‘transition period’ after Brexit, during which Britain will effectively remain an EU member but lose its representation and votes in the EU’s institutions, to give her more time to find a solution acceptable to Brussels.

We cannot find the money to fund our front line police properly. We cannot find the £2b for the vulnerable on UC, but we can mysteriously find billions to bung to the EU for the unnecessary extra year Clegg and Blair asked Barnier for to waylay Brexit??

Mrs May’s offer of an extension is proving unpopular with Tories in both the Leave and Remain wings of her party, however, and her own Secretary of State for Scotland — the normally europhile David Mundell — has broken ranks to say an extension of the transition period would be “unacceptable” as it would expose Scottish fishermen to further privations under the EU’s highly damaging Common Fisheries Policy (CFP).

Even Ruth Davidson, the Scottish Tory leader who served on the official Remain campaign’s debate team in the televised clash between Vote Leave and Britain Stronger in Europe (BSE) which concluded the 2016 referendum, is thought to oppose a transition extension, with the party’s Scottish MPs indicating they would more than likely vote against one.

Nick Boles, who plays a leading role among a group of around a hundred Tory Remainers, says he is “afraid [Theresa May] is losing the confidence now of colleagues of all shades of opinion”, describing the party as “close to despair” and expressing concerns that the Prime Minister is actively conspiring with her EU counterparts to bounce her MPs into submitting to a “humiliating” deal.

If Theresa May is asking for a longer transition period, she is stalling. It’s time to stand aside and let someone who can negotiate get on with it and deliver. I fully support DD as an interim leader. I’ve done my bit. It’s time for my colleagues to do theirs. #Brexit

Brexiteer MPs, perhaps unsurprisingly, appear even more restless, having long argued that the issue of the Irish border — which is of little economic importance in terms of trade — has been deliberately exaggerated in order sabotage Brexit, and could easily be kept open through existing technical solutions without any backstop.

Jacob Rees-Mogg, who serves as ad hoc leader of around 60 Bexiteer Tories, was among several MPs who have highlighted the fact that a longer transition would mean billions more in contributions to the EU budget — “paying for the privilege” of remaining subject to Brussels with no say over EU governance.

Former Brexit Secretary David Davis, who resigned from the Cabinet after her Chequers plan for Brexit was first imposed, claiming it would deliver a Brexit in name only, is said to be directly lobbying Cabinet to overrule the Prime Minister, amid calls from backbenchers such as Nadine Dorries for him to be installed as an interim or caretaker leader who can get the negotiations back on track.

Davis’s allies claim he wants a change of policy rather than a change of prime minister, but one minister he spoke to has told the press they believe he is “definitely on manoeuvres”.