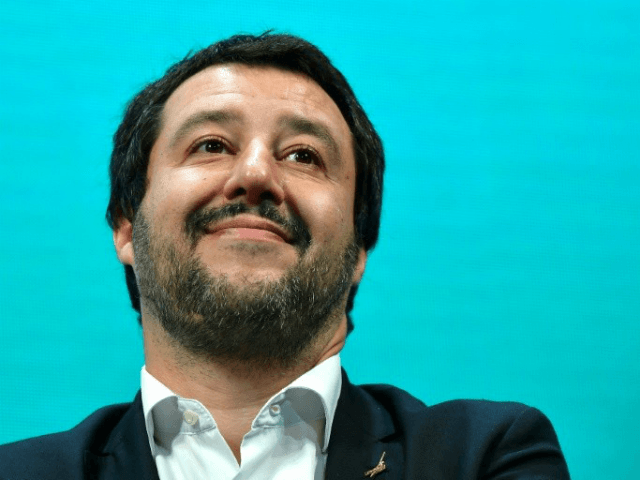 Italy’s League under Matteo Salvini is now the most popular political party in the nation, with a voter affiliation of 33.8 percent, a nationwide electoral poll revealed Saturday.

The monthly survey conducted by the IPSOS research group, which inquired about citizens’ voting intentions, showed the Five Star Movement (M5S) — the League’s partner in the current coalition government — falling by 1.5 percentage points over the last month to 28.5 percent. This figure represents a three percentage-point drop for M5S from mid-July and a widening gap between the two governing partners.

Silvio Berlusconi’s Forza Italia party has meanwhile fallen to 7.8 percent, down slightly less than one point compared to the last published figure, while the center-left Democratic Party (PD) stands at 17 percent.

The PD registered a slight uptick compared to recent months, thanks to recent rallies, increased media visibility, and the perception of greater cohesion among the leadership of the party.

Observers suggest that the solid performance of the League is due in large part to the constant media presence of party chief Matteo Salvini, Italy’s interior minister and deputy prime minister. Salvini has persistently sought to rein in Italy’s illegal immigration problem and has stood up against globalist leaders such as France’s Emmanuel Macron.

The distress of the M5S flows in part from perplexities surrounding the so-called citizenship income, which are amplified in the north of the country where this measure is perceived as expensive and needlessly close to welfare.

The M5S has seen substantial losses among the self-employed and management classes, probably in relation to the issue of citizenship income, and among students, while maintaining and even slightly improving its status with unskilled labor and the unemployed.

Overall approval ratings of the coalition government and of the prime minister remain very high, with a rating of 64 for the government and an impressive 67 percent for Prime Minister Giuseppe Conte.