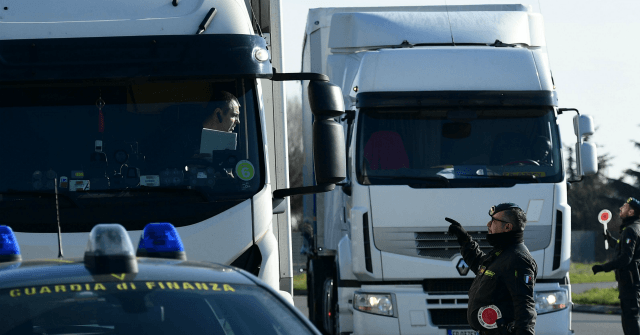 Italian authorities have seized a shipment of 1,840 manual respirators and other supplies in the port of Ancona that was heading for Greece in order to help fight the ongoing Wuhan coronavirus outbreak.

The seizures were carried out by the Guardia di Finanza (GdF), a police division under the authority of the Ministry of Economy and Finance, under a prohibition for companies to sell medical devices overseas during the coronavirus crisis.

The truck containing the medical supplies was stopped by authorities after it had passed a number of security checks before it was about to head to Greece.

Customs officials conducted an inventory search of the truck and found 1,840 respirators, which were then handed over to the Guardia di Finanza and seized, newspaper Il Giornale reports. The newspaper reported the devices comprised of a mask, tube, and hand-operated balloon, and are used to help airflow into the lungs.

According to the paper, the masks and other supplies will be distributed to hospitals across the country where demand for new supplies is high.

Italy is not the only country to have seized medical supplies bound for another country. The French government under President Emmanuel Macron seized trucks containing 130,000 FFP3 face masks that were headed to the UK earlier this month.

The day before, the French had seized another shipment containing hand sanitiser which was also headed for the UK, developments which imply a severe breakdown in the spirit of cooperation between nations as medical supplies run short globally amid enormous demand.

Seems Macron’s France is much better at stopping medical supplies for British hospitals from crossing the Channel than it is at stopping illegal migrants… https://t.co/V1i10Qil86

For weeks, Italy has been the epicentre of the Wuhan coronavirus outbreak in Europe and more recently has surpassed China’s official government figures for the number of deaths related to the disease and become the focal point for the global pandemic.

Earlier this week, it appeared that the number of deaths per day was decreasing in Italy but figures released on Tuesday show the death toll to be rising once more as the country recorded 743 lives lost due to the virus in 24 hours.

Italy is also approaching China’s infection numbers with 69,176 confirmed infections to China’s latest figures of 81,171 cases. One in ten of the confirmed coronavirus cases in Italy is said to be medical professionals.