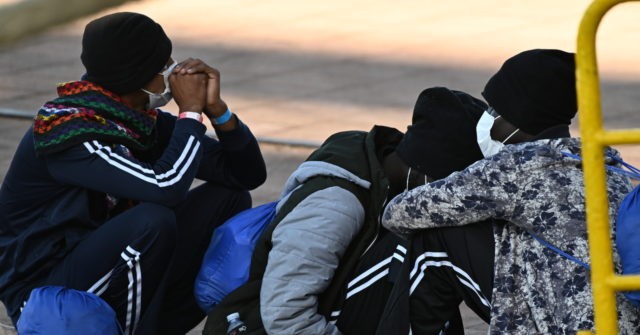 In the first four weeks of the year, the number of migrants arriving illegally on Italian soil has nearly tripled compared to the same period last year as the country continues to struggle to deport illegals.

Italy has seen a surge in migrant arrivals in the first month of the year, according to Italian Interior Ministry statistics that show a total of 3,035 migrants arrived in the country, nearly a tripling of the 1,039 who arrived during January of 2021.

Deportations are also a struggle for the Italian government, which has made attempts under Prime Minister Mario Draghi to find a European Union-level solution to the problem and allow for faster repatriations of illegals.

Some migrants have also resorted to refusing to take Wuhan coronavirus tests or taking the coronavirus vaccine in order to avoid being deported.

An increase in illegal migrant arrivals in January was also been witnessed in Spain, where 4,202 migrants arrived, an increase of 30.6 per cent compared to the prior year, with most arriving along the dangerous route to the Spanish Canary Islands.

Members of the populist League led by Matteo Salvini, which is part of the grand coalition government under Draghi, have begun to express concerns over the lack of deportations, according to a report from the newspaper Il Giornale.

“The absence of a centralized removal policy of the European Union and the elimination of assisted voluntary repatriations have made any policy of expulsion from Italy fleeting,” a League source told the newspaper.

Members of the party have also allegedly taken umbrage with the continued flow of migrants to Italy through the Central Mediterranean route, which surged in 2021 and saw the most illegal arrivals — 68,309 in total — of all the main migrant routes to Europe, according to UNHCR statistics.

The UNHCR estimates that just over 8,650 migrants have arrived in Europe via the Mediterranean between January 1st and February 6th. The Spanish route is currently the most active with nearly 5,000 arrivals, while Italy has seen 3,053 during the same period.

Libya Intercepted Over 30k Migrants Heading for Europe in 2021https://t.co/XF7L7lsv9x