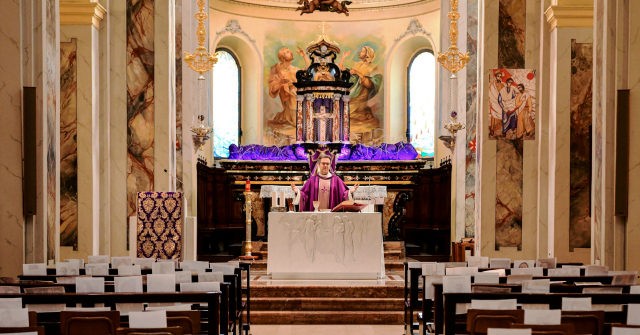 ROME — Italy’s Interior Ministry decreed Friday that going to a church to pray does not constitute a valid reason for leaving one’s home during the coronavirus lockdown, and violators are subject to heavy sanctions.

Italians may leave their residences to purchase cigarettes, food, and medication and to walk their dogs, but they may not go to pray in a church unless they have a superior reason for being out and about and the church happens to fall along their path, in which case they may enter to pray, the Interior Ministry declared.

In recent days, a number of church leaders have asked whether going to church for one’s spiritual health is more like going to the supermarket and pharmacy, which are considered essential and permitted, or like going to a cinema or sports stadium, considered optional and, therefore, forbidden.

The Italian state has responded that churches fall into the latter category and thus are an insufficient reason to leave home. Those judged noncompliant with the strict norms restricting movement are subject to a fine between 400 and 3,000 euros, according to regulations released this week.

Asked expressly whether believers are permitted to leave their homes, with an auto-certification, to go to church to pray, the Interior Ministry responded negatively.

Church is not considered an essential activity, and, therefore, leaving one’s residence is not permitted, the Ministry said. Stopping at a church may only take place when one is away from home for proven work needs or situations of necessity and the church is located along the route. If stopped by a police officer, the Ministry added, one must show a valid reason for being out, other than simply going to church.

The Ministry insisted that this decree does not constitute a violation of religious liberty since it is not directed as “persecution against the Church,” but “forms part of the measures necessary to stop the expansion of contagion and for the common good.”

The Italian government’s decision comes hard on the heels of concerns voiced this week that sweeping state actions to combat the spread of coronavirus endanger religious liberty.

“When the world deals with a crisis such as this — the coronavirus pandemic — religious freedom is often affected first, especially in countries that are closed off to Christianity,” Dede Laugesen, executive director of Save the Persecuted Christians (STPC), said in an article published last Tuesday.

The U.S. Commission on International Religious Freedom (USCIRF) also released a fact sheet this week outlining some of the effects of the coronavirus outbreak on religious liberty worldwide.

Since the coronavirus outbreak, governments have been implementing various public health interventions to control the spread of the illness, including “large public programs, restrictions on freedom of movement, and government management of critical resources,” USCIRF noted.

“It is important for governments to account for religious freedom concerns in their responses to COVID-19, for reasons of both legality and policy effectiveness,” USCIRF declared. “From a legal perspective, international law requires governments to preserve individual human rights, including religious freedom, when taking measures to protect public health even in times of crisis.”

In an article posted Tuesday, Italian journalist Andrea Gagliarducci asked why freedom of worship is not among the compelling reasons for leaving one’s home and why the church has not insisted on this.

The underlying problem is not just an overreaching state anxious to deprive believers of their rights, but the ready acquiescence of the church to such overreach, Gagliarducci suggested.

“The problem is that, while in an emergency, the church is not thinking about defending what she has to defend: freedom of worship,” he wrote.