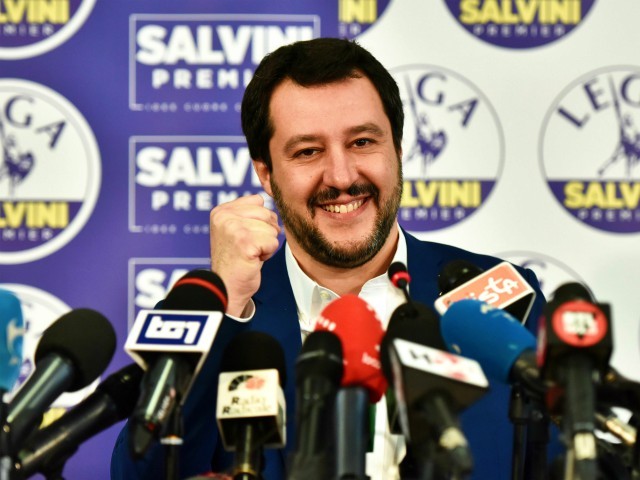 Illegal sea landings to Italy have dropped by 80 per cent in just one year after the country’s populist government enacted tough new immigration measures.

Between January 1st and December 2nd 2018, 23,011 migrants arrived by sea to the shores of Italy compared to 117,120 over the same period last year, according to data published by the United Nations’ International Organization for Migration (IOM).

In contrast, socialist-run Spain has seen its migrant arrivals increase by more than two and a half times (263 per cent) from 20,043 to 52,678 across the same periods.

It was in the summer that Italy, under the directive of interior minister and deputy prime minister Matteo Salvini, halted much of the illegal migration by blocking private non-governmental organisation (NGO) migrant transport vessels from docking in Italy, starting with denying port to the Aquarius, chartered by SOS Méditerranée and Médecins Sans Frontières (MSF or Doctors without borders).

After an eight-day standoff in the Mediterranean Sea, where neither Italy nor Malta would accept the vessel, Spain welcomed the Aquarius and its 629 sub-Saharan African migrants to its shores.

“Europe’s demographic evolution shows that unless we want to gradually turn into an ageing continent, we need new blood, and it doesn’t look like this new blood is coming from our capacity to procreate,” Borrell said in August.

Italy: Around 2,000 Migrants Expected To Leave Every Month Under Tougher Rules https://t.co/g9YbLqjhfB

To deal with the issue of illegal migrants in Italy, Salvini unveiled in September a security and migration decree which terminates humanitarian residency permits, which allows migrants to live temporarily in Italy who do not qualify for ordinary asylum, and increases funding for deportation centres.

Some 2,000 migrants with the permit a month are expected to be deported when the law comes into force in January 2019 as the two-year limited visas expire.

Recently, Mr Salvini told the European Union’s Schengen Committee he does not want Italy to renew engagement in Operation Sophia, the EU-run venture where several member states partner to pick up migrants in the Mediterranean Sea, confirming the country’s “unavailability” of landing ports.