ROME — The bishop of the northern Italian diocese of Bergamo has suspended a priest of the diocese for publicly opposing Italy’s vaccine mandate.

Bergamo Bishop Francesco Beschi relieved Father Emanuele Personeni from all pastoral duties just prior to the priest’s planned tour of parishes throughout Italy to protest the government’s imposition of the Green Pass on citizens.

The priest has argued that the vaccine mandate and imposition of the green pass violate “the fundamental rights of the person.”

Personeni wrote a letter to Pope Francis insisting that “the vaccine’s side effects certified by the American, European, and Italian supervisory bodies have reached such levels as to push independent technical scientific bodies to suggest the need for a reevaluation of the overall vaccination strategy, especially among the youth and adult population.”

In his letter, the priest also criticizes what he calls “indiscriminate vaccination” as well as mainstream media that continue “to silence divergent narratives, even when based on data, labeling them anti-scientific conspiracy theories.” 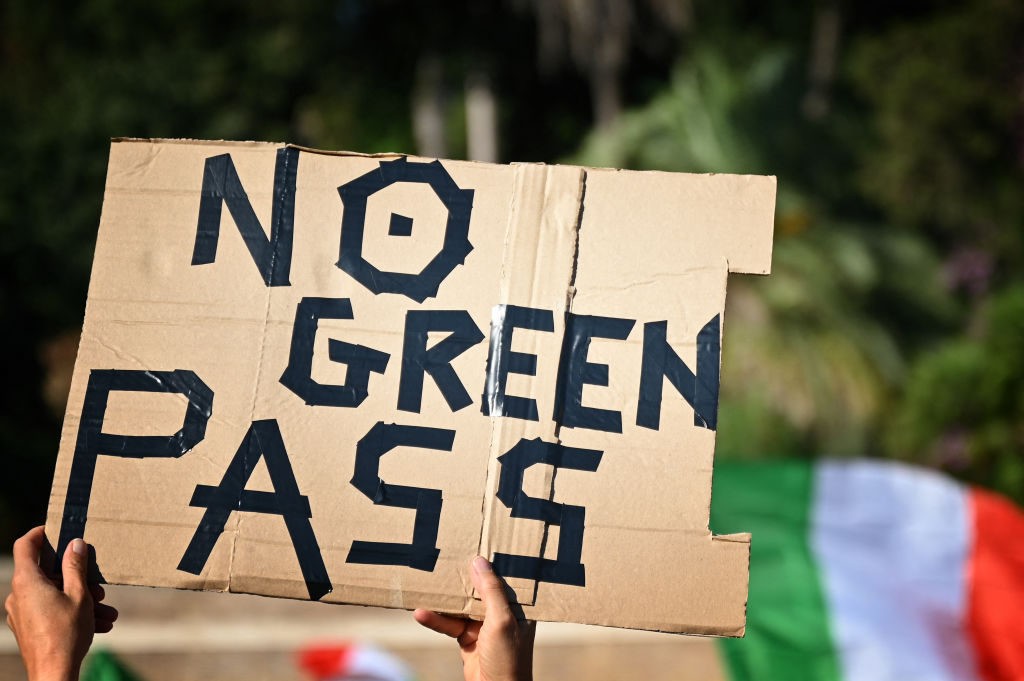 A member of the ‘No Vax’ holds up a placard during a demonstration against the introduction of a mandatory “green pass” in the aim to limit the spread of the Covid-19, at the Piazza del Popolo in central Rome on August 7, 2021. (ALBERTO PIZZOLI/AFP via Getty)

He similarly denounces measures employed by civil authorities, who “frankly have been persecutors and blackmailers for some time.”

The diocesan spokesman Msgr. Giulio Della Vite told media that the priest in question had announced via social media that he was intending to begin his tour of the country Friday.

Together with two other priests, Father Emanuele Personeni had also reportedly distributed a pamphlet titled “COVID-19: The accounts do not add up” and had sponsored fundraisers to pay for ongoing coronavirus tests for those who had opted out of vaccines, for which he had been publicly reprimanded by the bishop.

In a letter to the priests of the diocese, Bishop Beschi accused Father Personeni of abandoning “the community entrusted to his pastoral care as parochial vicar.”

On suspending Personeni from his pastoral duties, the Bishop of Bergamo has prohibited any other parish from taking him in or granting him a platform for his ideas, which contrast with the official position of the diocese in favor of vaccine mandates.

Getting the vaccine is a “moral obligation” as well as a “legal obligation,” the bishop stated, “dictated by a spirit of ecclesial harmony and responsibility on the part of those who have roles of leadership in the communities.”