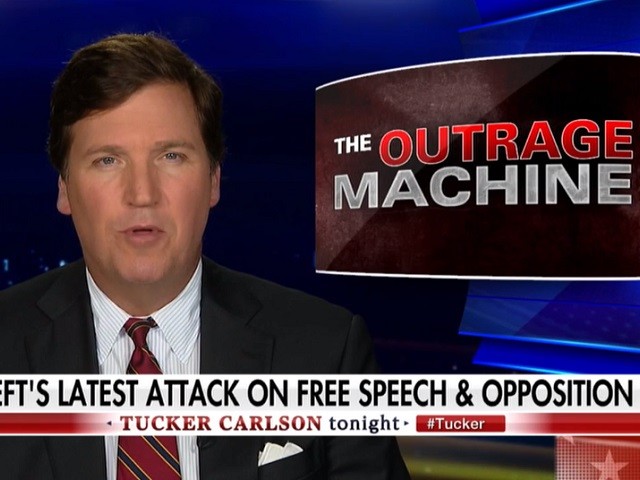 “#IStandWithTuckerCarlson” trended on Twitter today as conservatives rallied to Carlson’s defense after a coordinated attack on the Fox Host’s advertisers by the woke leftist mob.

Leftists targeted Carlson over his coverage of Black Lives Matter and the George Floyd riots, which has focused on acts of violence and criminal behavior as America’s cities descended into chaos over the past two weeks.

On June 2, at the height of the riots, Carlson devoted a segment to the murder of retired police officer David Dorn.

Tucker Carlson On The Violence Against Cops By The Mob

“For 38 years David Dorn was a police officer in the city of St. Louis. No one ever accused Dorn of racism, he was black. He’s dead now, he was murdered last night by the mob.” pic.twitter.com/hszxwYSn7h

Leftists including Far-left activist group Sleeping Giants, which spreads smears to the advertisers of conservative websites to financially blacklist them, led a campaign against Carlson’s show over comments he made on the Monday episode of his show.

“This may be a lot of things, this moment we are living through,” said Carlson on Monday. “But it is definitely not about black lives and remember that when they come for you, and at this rate, they will.”

A Fox News spokesperson told the Washington Post that “Tucker’s warning about ‘when they come for you’ was clearly referring to Democratic leaders and inner-city politicians.”

In response to the attempt to censor and financially blacklist Carlson, conservatives have taken to Twitter to express support for the Fox host.

“Those who do not fight real evil, fight statues,” said the official Twitter account of PragerU, whose founder appeared on Carlson’s show earlier in the week.

#IStandWithTuckerCarlson. There is arguably no one in the media as bold, honest, and blunt as Tucker.

“There is arguably no one in the media as bold, honest, and blunt as Tucker,” said independent political commentator Kaitlin Bennett.

#IStandWithTuckerCarlson because it causes the right butts to hurt.

“#IStandWithTuckerCarlson because it causes the right butts to hurt,” said Nick Searcy, director of the pro-life film Gosnell.

1.5 million views for an out of context quote.

Here’s the full clip. The only way they can get Tucker is by lying about him.#IStandWithTuckerCarlson pic.twitter.com/N6k3V4HCnW

Greg Price of the Daily Caller drew attention to leftists taking Carlson clips out of context.

One man’s TRUTH is another man’s racism.
Tucker Carlson speaks the truth and we must never allow the left to silence him. Raise your hand if you agree.#IStandWithTuckerCarlson

“One man’s truth is another man’s racism,” said Republican politician Dave Giles. “Tucker Carlson speaks the truth and we must never allow the left to silence him.”