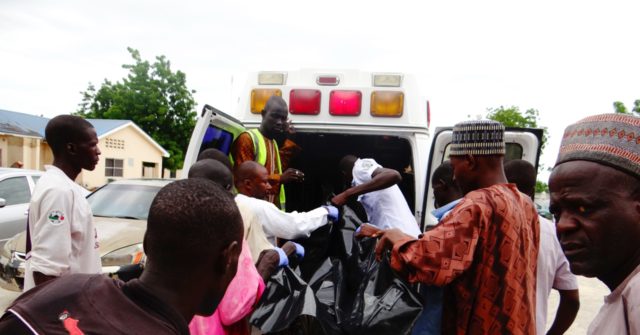 Scores of armed militants from the Islamic State terror group in West Africa (ISWAP) invaded the town of Dikwa in northeast Nigeria late Monday and attacked a military camp and a U.N. base.

“We have 25 staff sheltering in the bunker which is under siege by the militants,” said a humanitarian source under condition of anonymity. “The humanitarian base was set on fire by the fighters but so far no staff has been affected.”

Borno State authorities have sent military reinforcements — including two fighter planes and a helicopter gunship — to Dikwa from the city of Marte, some 30 miles away, Italy’s ANSA news service reported.

Dikwa, with a population of more than 130,000 people, is located 55 miles from the Borno state capital of Maiduguri. Its camp for internally displaced people (IDPs) houses 75,000 who had fled from other parts of the region.

Three years ago to the day, on March 1, 2018, ISWAP terrorists attacked a UN humanitarian hub in the northeastern city of Rann, killing three aid workers and kidnapping a female worker.

Vatican News reported that the failure by federal authorities and individual states to guarantee security is increasing the number of independent self-defense forces promoted by local communities.

The population of northern Nigeria has been victim of massacres and kidnappings for the purpose of extortion, enduring a decade-long conflict in which jihadist, military, and independent armed groups operate, it said.

The Nigerian bishops wrote in a recent statement that the breakdown of security is weakening national unity and Nigeria is on the “brink of collapse.”

“Our country Nigeria has gone through many crises, and so far, has managed to survive them, by God’s grace,” the bishops wrote in their February 23 communiqué. “But the ongoing crisis in the country should be of grave concern to everyone who still believes in ‘one united nation under God.’”

“We are really on the brink of a looming collapse, from which we must do all we can to pull back before the worst overcomes the nation,” they wrote. “This is not merely crying wolf without cause!”