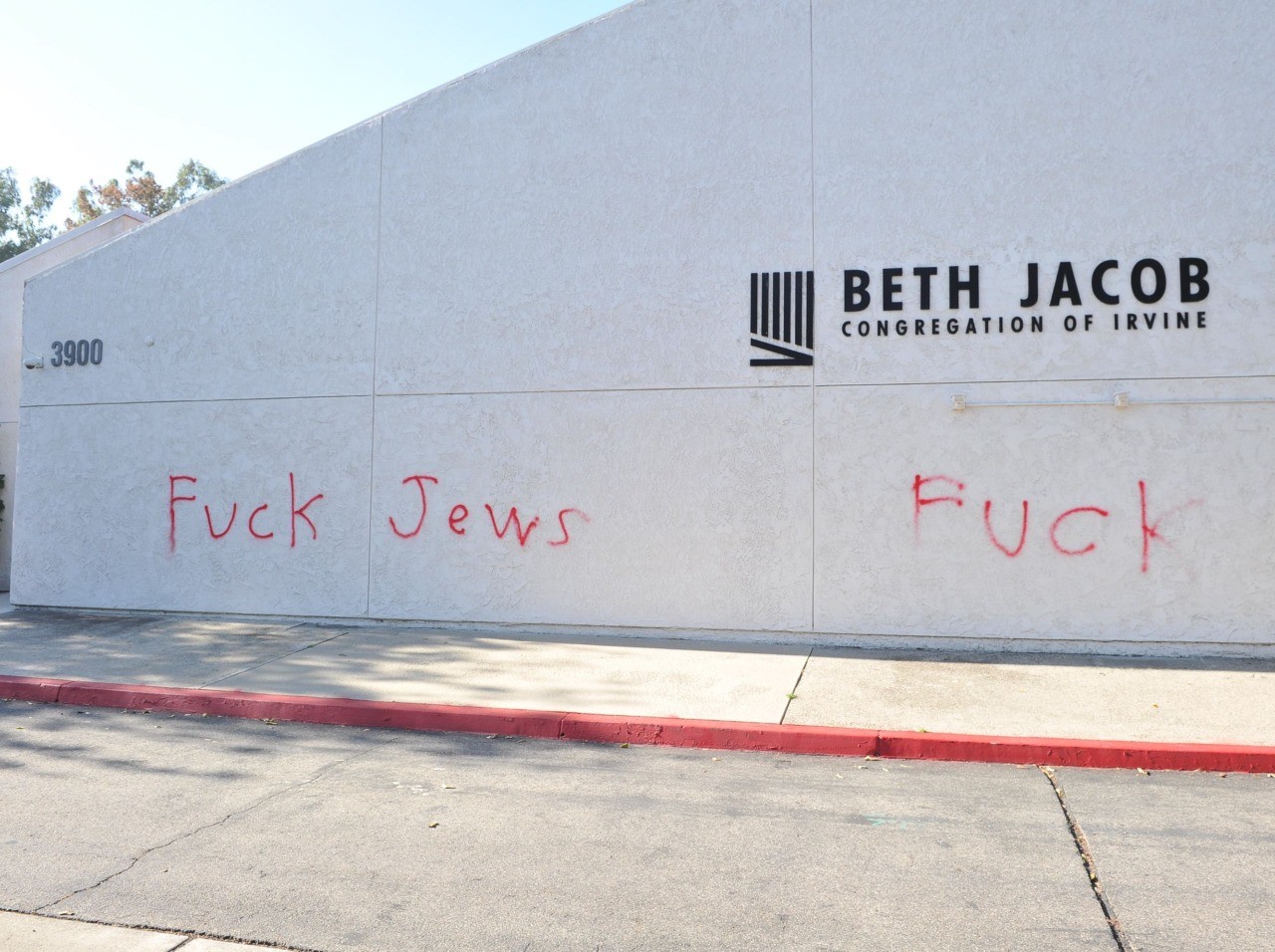 Although there are still no suspects in the early Wednesday morning defacing of a synagogue with antisemitic graffiti, the City of Irvine proclaimed solidarity against intolerance.

The City of Irvine’s website proudly proclaims the honor of being America’s ‘Safest City for 13th Year.’ But that did not stop a vandal from spray-painting antisemitic slurs on the exterior walls of Beth Jacob Synagogue at 3900 Michelson Drive at 1:18 AM on Halloween morning.

The timing of the vicious defacement by a perpetrator that jumped a fence wearing a hoodie, sunglasses, and a surgical facemask came on morning after the first day of funerals for the 11 worshipers murdered at the Tree of Life synagogue in Pittsburgh’s Squirrel Hills suburb.

The FBI’s Annual Uniform Crime Report released on September 24 revealed that Irvine was the ‘Safest City’ per capita for all U.S. cities with population of 250,000 or more regarding serious crimes, including “murder, rape, robbery, aggravated assault, burglary, larceny-theft, auto theft and arson.”

Irvine Mayor Don Wagner highlighted that winning the recognition for the 13th consecutive year was a collaborative effort between the dedicated officers of the Irvine Police Department, residents and members of the business community.

But it was reported to the Irvine City Council on October 26 that Irvine Valley College restrooms had recently been defaced with anti-Semitic swastikas, and flyers for a Muslim group had been defaced. Irvine Police Department Chief Mike Hamel assured the Irvine City Council that his officers were “committed to providing an academic and work environment that respects the dignity of all individuals.”

Mayor Wagner on October 31 following the Beth Jacob incident stated: “This morning’s news of anti-Semitic vandalism against one of Irvine’s synagogues, along with reports of a recent incident at Irvine Valley College, are both enraging and unacceptable. They will not go unchallenged by the good people of Irvine. An attack on anyone in Irvine of any faith is an attack on us all.”

The Irvine Police Department (IPD) immediately labeled the second act a hate crime and emphasized it is now demonstrating support for the city’s Jewish community by increased patrols at the City’s Jewish facilities.  IPD is also working with its partners in the Jewish community to reaffirm the Department’s commitment to protecting their members, houses of worship and educational institutions.