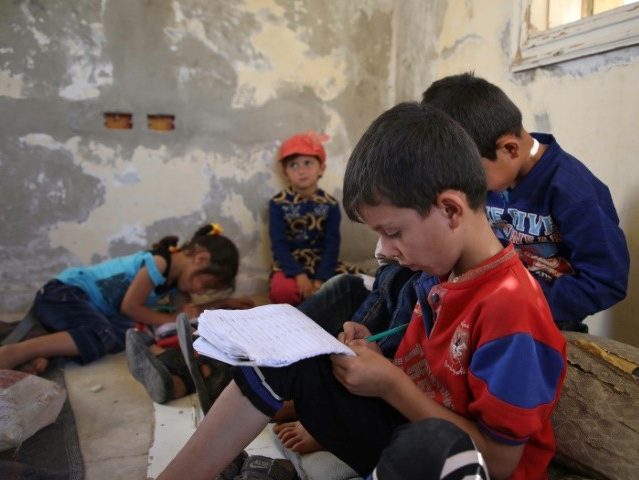 “Children told Human Rights Watch that in 2017 and 2018, [Kurdish] security officers, known as Asayish, used beatings, stress positions, and electric shock on boys in their custody. Most said they had no access to a lawyer and they were not allowed to read the confessions Asayish wrote and forced them to sign,” the watchdog group reported Tuesday.

Kurdish authorities, including the KRG’s internal police force known Asayish, are holding thousands of prisoners accused or convicted of having joined ISIS, including women, children, and foreigners.

In response to the HRW report, Dindar Zebari, the KRG’s coordinator for international advocacy, declared in a statement issued Tuesday, “The detainees who have confessed have confessed of their affiliation with IS [Islamic State] under no pressure of any type by the authorities.”

“The KRG reiterates that inappropriate treatment such as torture toward detainees and especially children and juveniles on behalf of the police departments and other security departments are not permissible or tolerable under any circumstances,” he added, according to Kurdistan 24.

ISIS terrorists have been accused of indoctrinating children across Iraq and Syria into being the next generation to wage jihad.

HRW’s gleaned its report from interviews conducted in November 2018 with about 20 boys age 14 to 17 charged or convicted of joining ISIS and held at the Women and Children’s Reformatory in the Iraqi Kurdistan capital of Erbil.

Most (16) of the children interviewed reportedly accused the KRG’s internal police officers of “beating them all over their bodies with plastic pipes, electric cables, or rods.”

Some of them accused the Asayish officers of using “electric shocks.”

A teenager arrested by Kurdish security forces at a checkpoint in late 2017 when he was 16 told HRW:

[Kurdish authorities] bound my hands behind my back, one from above and one below. They beat me with a stick and they gave me 5 to 10 electric shocks. They put the pads on my left shoulder and on my stomach. And while they gave me the shocks, they were beating me with a rod. They did this three days in a row. I was in the room for hours, with them coming in and out and taking breaks. On the third day I confessed. They said to admit to two months with ISIS. I did, but it was a lie. I was never with ISIS.

Others told HRW authorities tied them for hours into a painful stress position dubbed the “scorpion.”

A boy arrested in 2017 when he was 14 told HRW, “They [Asayish officers] beat me all over my body with a plastic water pipe, and then tied my hands like a scorpion [one arm over the shoulder, and the other behind his back] for two hours.”

U.S. military officials have deemed the Iraqi Kurdish peshmerga military forces as one of the most effective against ISIS. With the support of the peshmerga and Iraqi security forces, the U.S.-led coalition decimated ISIS’s territorial caliphate in Iraq, pushing the terrorist group into a small pocket of land in northern Syria.

“Many of these children have already been scarred by conflict and ISIS abuses,” Becker added. “Instead of achieving justice, torture and coerced confessions only compound their suffering and contribute to further grievances.”

The KRG has dismissed the accusations of torture as false, HRW and Kurdistan 24 reported.

KRG official Zebari pointed out that Iraqi Kurdistan has granted the International Committee of the Red Cross (ICRC) and United Nations agencies access to the detention facility mentioned by the watchdog’s report.

“The KRG security departments and the reformatory center in Erbil have not received any complaints of ill-treatment and torture” from the IS child detainees,” he said, according to Kurdistan 24.

KRG officials “immediately” investigate any instances of detainee mistreatment discovered by the KRG, the Kurdish official assured, adding that Iraqi Kurdistan would not hesitate to punish “anyone who is guilty of ill-treating the detainees” in accordance with applicable laws.

Kurdistan24 acknowledged that Zebari “did not give details of internal oversight procedures that would encourage a detainee to make such claims without fear of possible retribution, particularly a minor.”

“Admitting to ISIS involvement did not preclude being tortured,” HRW reported.