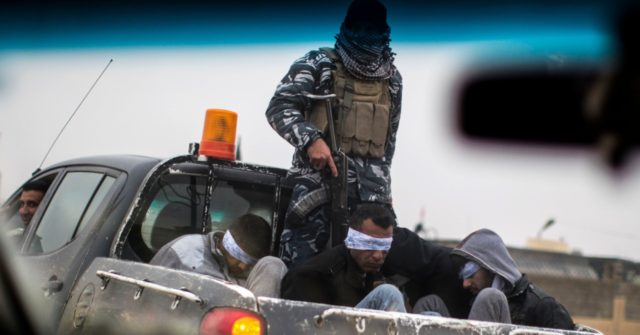 Three French citizens have been sentenced to death after they were found guilty Sunday of joining the Islamic State terrorist group, an Iraqi court official said.

Captured in Syria by a U.S.-backed force fighting the jihadists, they are the first French terrorists to receive death sentences in Iraq, where they were transferred for trial.

Named by AFP as Kevin Gonot, Leonard Lopez and Salim Machou, they have 30 days to appeal.

As Breitbart News previously reported, the three sentenced to death are part of a group of 12 French terror suspects whose cases faced the Iraq justice system.

All will be tried according to Iraq’s counterterrorism law — which can dole out the death penalty to anyone who joined a terror group, even if they were not in direct combat.

Here are the specifics of the three who have been convicted, as supplied by the French Terrorism Analysis Center (CAT) and other sources compiled by AFP:

Kevin Gonot, 32, entered Syria through Turkey to join IS rival and former Al-Qaeda branch Al-Nusra Front, according to a confession published by Iraq’s judiciary.

He then pledged allegiance to IS, fighting under the name Abu Sufyan, before being arrested in Syria with his mother, wife, and half-brother Thomas Collange, 31.

He said his father was killed in IS’s de facto Syrian capital, Raqa.

French courts have already sentenced Gonot in absentia to nine years in prison.

Even before IS, 32-year-old Leonard Lopez was known to French authorities for his activity on Francophone jihadist website Ansar al-Haqq in the 2000s.

In July 2015, the native Parisian travelled with his wife and two children to IS-held Mosul in northern Iraq before entering Syria, according to French investigators.

Lopez, known as Abu Ibrahim al-Andalusi after joining IS, was sentenced in absentia in 2018 for his involvement in Ansar al-Haqq but is also wanted on other charges.

At 41, Salim Machou was a member of the infamous Tariq ibn Ziyad brigade, “a European foreign terrorist fighter cell” that carried out attacks in Iraq and Syria and planned the Paris and Brussels attacks, according to U.S. officials.

Iraq has taken custody of thousands of jihadists repatriated in recent months from neighbouring Syria, where they were caught by the U.S.-backed Syrian Democratic Forces during the battle to destroy the IS “caliphate”.

In 2015 one report by the French senate revealed 47 percent of all known jihadists in what was then Islamic State territory were French citizens, with national intelligence networks having to keep tabs on up to 3,000 individuals at any one time.

Iraqi courts have since placed on trial hundreds of foreigners, condemning many to life in prison and others to death, although no foreign IS members have yet been executed.

No date has yet been for the execution of the French terrorist trio.