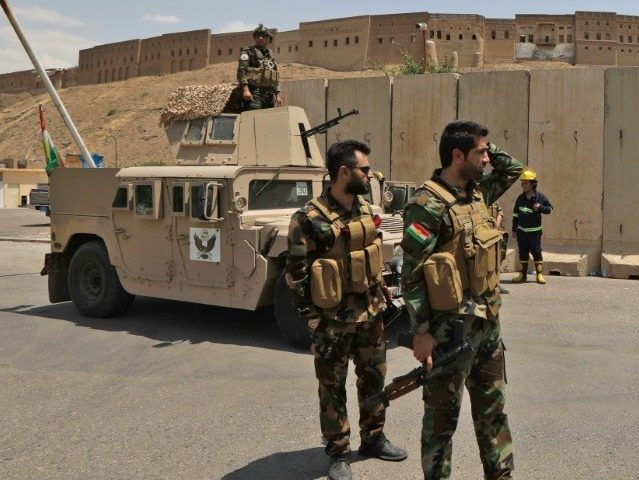 Iraq’s foreign ministry (FM) on Sunday condemned Ankara’s forces for shooting at a crowd of demonstrators in Iraqi Kurdistan who attacked a Turkish military camp in protest of Turkey’s most recent airstrikes on members of a Kurdish terrorist group, a move that violated Iraq’s sovereignty.

The Iraqi FM denounced “Turkish forces opening fire on our citizens in [the Iraqi Kurdistan town of] Sheladize … which resulted in the death and injuries of some people,” in a statement, according to Kurdistan 24.

“This was followed by Turkish military aircraft flying at low altitudes,” the statement reportedly added.

Without Baghdad’s consent, Turkey has established a military presence in northern Iraq and periodically carries out airstrikes against the Kurdistan Worker’s Party (PKK) terrorist group, which maintains a stronghold in the Iraqi Qandil Mountains region near the Turkish border.

PKK terrorists have been waging an insurgency inside Turkey for decades that has left tens of thousands of people dead.

Baghdad has reportedly summoned the Turkish envoy in Iraq for opening fire on the Kurds.

“Angry protesters,” estimated in the hundreds, “stormed a Turkish military base in northern Iraq on Saturday, burning Turkish military vehicles and leading to a confrontation that left one teenager killed and 10 injured,” the Associated Press (AP) reported, citing officials from Iraq’s semi-autonomous Kurdistan Regional Government (KRG).

Although Baghdad has warned Turkey against the violation of its sovereignty, Ankara has reportedly established at least 11 regional bases in northern Iraq and doubled its military footprint in the region.

In the wake of Turkey opening fire on the Kurdish protesters, Iraq’s foreign Ministry indicated “they were summoning the Turkish Ambassador to Baghdad and sending a note to Ankara demanding such an incident never be repeated in Iraq,” Kurdistan 24 notes. “It stressed the Iraqi government’s strong condemnation of any violations of its security and sovereignty by any country.”

Iraq condemns “the use of its territory to threaten the security and safety of any neighboring country,” the ministry declared.

In condemning the attack on its seemingly illegally established military base in Iraq, Turkey’s Defense Ministry reportedly wrote on Twitter, “An attack has occurred on one of the bases located in northern Iraq as a result of provocation by the PKK terrorist organization. There was partial damage to vehicles and equipment during the attack.”

Although the PKK is considered a terrorist group, fighters from the organization helped the Yazidi ethnoreligious minority group push the Islamic State (ISIS/ISIL) out of its homeland in Iraq. Turkey and some U.S. officials consider the American-allied People’s Protection Units (YPG) to be the Syrian affiliate of the PKK. U.S. support for the YPG has strained relations between NATO allies Turkey and the United States. Nevertheless, the United States continues to support the YPG’s fight against ISIS.

U.S.-allied Syrian Kurds have expressed concerns that America’s plans for withdrawing most of its 2,000 troops from Syria will leave them vulnerable to attacks from Turkey. However, the U.S. has conditioned its withdrawal on assurances that America’s Kurdish allies will be safe. Moreover, the U.S. is planning to leave behind a residual force in Syria and there are no plans to withdraw the nearly 5,000 American service members in neighboring Iraq who are expected to be able to go into Syria if necessary.