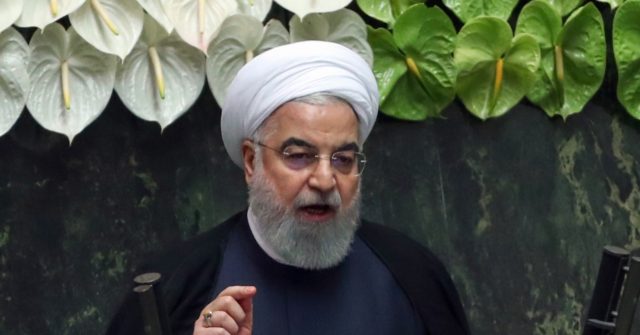 Iranian President Hassan Rouhani boasted Saturday his country is beating advanced economies such as Germany during the coronavirus pandemic. However, in a country where telling the truth is regarded as an act of sedition, he made no mention of some 60 million Iranians now relying on state aid to survive.

“While the economy of an advanced country like Germany has faced problems because of the coronavirus outbreak, our economy has better conditions thanks to the efforts by production companies and economic sectors,” Rouhani said during a meeting of the coronavirus taskforce, Tasnim News Agency reported.

Rouhani claimed Germany’s economy has recorded a 5.2 percent contraction since the start of the outbreak, while the Islamic republic on his watch thrives and just keeps getting better.

“This is an advanced country that neither is under sanctions nor has any problems. Our economy will have better conditions than this figure and our economic growth minus oil will be positive till the year end.”

The president predicted Iran would have economic growth rates above zero by the end of the current Iranian year (March 2021) with or without oil sales, a broad boast of the type that has previously drawn the attention of other word leaders:

“I think Iran doesn’t know where they are. I’ve been watching and reading a lot of reports. They are a very mixed-up country,” President Trump said. “They don’t know whether they are coming or going. They have problems economically.” https://t.co/VMVJPOKjg9

Rouhan’s boast of outstanding economic performance is at odds with the facts that show it is in demonstrably dire shape due mainly to mismanagement, U.S. sanctions, low oil prices and the impact of the coronavirus pandemic.

The economy is expected to contract by a whopping 12 percent in 2020, leaving hundreds of thousands of workers unemployed or in desperate need of government subsidies, RUDAW news reports.

The national currency has continued to slide, setting record lows several times this year, although it is forbidden in Iran to point out any such failings.

The active Iranian workforce is 26 million, of whom at least 10 million were jobless even before COVID-19 struck. Youth unemployment was at a staggering 40 percent. At least 33 percent of the population were already living under the absolute poverty line unable to meet their essential daily needs.

The Islamic Revolutionary Guards Corps — the regime’s Gestapo — controls over 80 percent of the economy, corruptly funneling money stolen from the people into private banks and using the rest to finance their burgeoning nuclear and ballistic missile programs.

As Breitbart News reported, earlier this year Iran sentenced an opposition journalist to death after he reported on those facts and the damage Tehran’s belligerent international positions brought to the nation’s economy.

The reports triggered nationwide protests against the Islamic regime. Authorities, who wanted to quell the protests, accused Zam of using his channel to incite unrest and arrested him in October 2019.