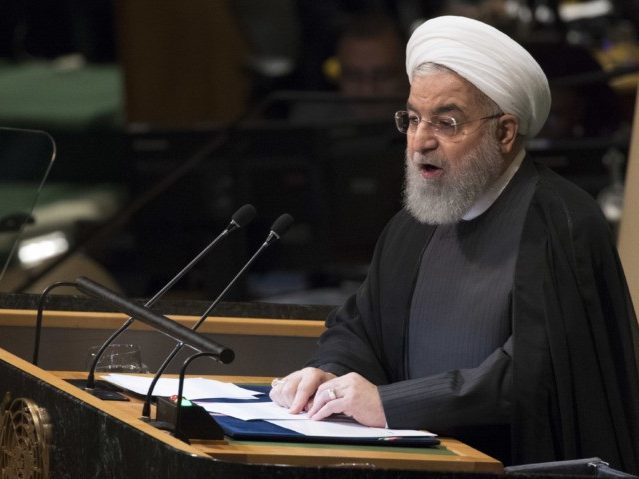 Without explicitly naming Trump, the leader of the Islamic Republic accused “rulers in the world,” clearly referencing the United States, of trying to seek power “through the fomenting of extremist, nationalism, and racism and through xenophobic tendencies resembling a Nazi disposition as well as through the trampling of global rules and undermining international institutions.”

Iran’s president also condemned U.S. sanctions as “a form of economic terrorism” and suggested that Trump may “dislike the [Iran nuclear deal] because it is the legacy of your domestic political rivals.”

Unlawful, unilateral sanctions in and of themselves constitute a form of economic terrorism and a breach of the right to development.

The economic war that the United States has initiated under the rubric of new sanctions not only targets the Iranian people, but also entails harmful repercussions for the people of other countries and that war has caused a disruption in the state of global trade.

“The United States’ understanding of international relations is authoritarian. … Its understanding of power, not of legal and legitimate authority, is reflected in bullying and imposition,” Rouhani said.

“No state and nation can be brought to the negotiating table by force,” the Iranian leader also proclaimed, adding that Tehran does not want any war.

“Our proposal is clear: commitment for commitment; violation for violation; threat for threat; and step for step, instead of talk for talk,” he also said.

Rouhani’s speech came after Trump blasted Iran’s support for terrorism during his address before the U.N. general assembly, which focused heavily on Tehran.

Iran’s leaders sow chaos, death, and destruction. They do not respect their neighbors or borders, or the sovereign rights of nations. Instead, Iran’s leaders plunder the nation’s resources to enrich themselves and to spread mayhem across the Middle East and far beyond…We ask all nations to isolate Iran’s regime as long as its aggression continues. And we ask all nations to support Iran’s people as they struggle to reclaim their religious and righteous destiny.

The U.S. president vowed to keep economic pressure on Iran to try to pressure the Islamic Republic to change its behavior.

Rouhani rebuked the Trump administration for withdrawing from the controversial Iran nuclear deal struck by former U.S. President Barack Obama’s government, a move that has reimposed hard-hitting sanctions against Tehran lifted under the agreement.

Rouhani also accused the Trump administration of trying to topple his regime.

He alleged, the “U.S. government does not even conceal its plan for overthrowing the same government it invites to talks!”

In its most recent annual assessment of terrorist activities across the world, the U.S. State Department determined that “Iran remains the world’s leading state sponsor of terrorism.”