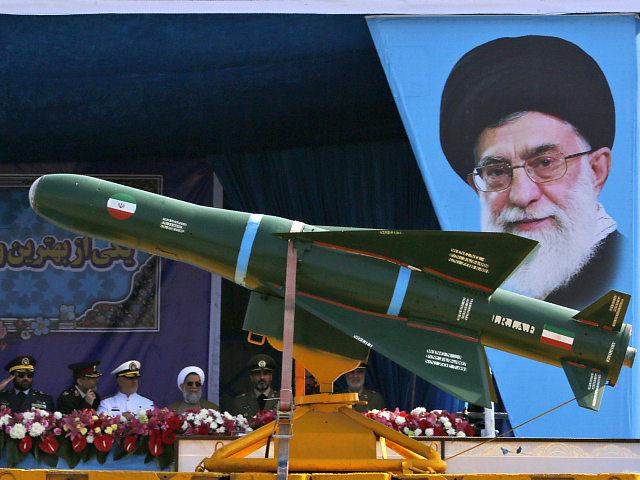 Iran carried out a large-scale military drill on Monday in an apparent effort to intimidate the United States as the Trump administration restored a wave of sanctions lifted under the 2015 nuclear deal.

On Sunday, Maj. Gen. Mohammad Ali Jafari, the top military chief in Iran, warned Trump against overreaching when dealing with the Islamic Republic, according to Al Jazeera.

While addressing a rally marking the anniversary of the seizure of the American embassy during the 1979 Islamic Revolution, Gen. Jafari declared:

I want to say something to America and its weird president. Never threaten Iran, because we can still hear the horrified cries of your soldiers in the [desert] … and you know it better, how many of your old soldiers in American society commit suicide every day because of depression and fear that they suffered in battlefields.

“So, don’t threaten us militarily and don’t frighten us with military threats,” he added.

“In his speech, Jafari assured the crowd that Trump’s attacks on Iran’s economy were a desperate attempt to defeat the republic and were doomed to fail,” Al Jazeera notes.

However, the news outlet concedes that “his optimistic tone stood in stark contrast to the widespread economic chaos Iran has endured during the past 12 months, including a nosedive in the value of its currency, a shake-up of President Hassan Rouhani’s economic team – which saw several senior ministers dismissed – and nationwide protests against price increases and dire economic conditions.”

Iran’s military drill on Monday came as the U.S. reimposed the new wave of sanctions on Iran, expected to deal a significant blow to Iran’s energy, shipping, and financial industries. The sanctions marked a return to the policy of maximum pressure against Tehran suspended under the controversial nuclear agreement officially known as the Joint Comprehensive Plan of Action (JCPOA).

Iran’s President Hassan Rouhani vowed to break the sanctions imposed on Tehran’s vital energy and banking sectors and it appears that Russia is willing to help.

“America wanted to cut to zero Iran’s oil sales … but we will continue to sell our oil … to break sanctions,” Rouhani declared on live state television on Monday, Al Jazeera points out.

“Moscow will do everything it can to preserve and expand international trade, economic and financial cooperation with Iran despite the US sanctions,” the state-run TASS news agency reports, citing the Russian foreign ministry.

Russia, a top ally of Iran in Syria, sent an envoy to Iran Monday to express Russian President Vladimir Putin ’s rejection of the fresh round of U.S. sanctions imposed on Iran.

Non-U.S. signatories to the Iran nuclear deal, including Russia and China, have decided to remain committed to the agreement without the United States, which pulled out in May.

Pompeo explained that the sanctions on Iran’s “energy, banking, shipping, and shipbuilding industries” are intended to convince the Shiite Islamic Republic to “abandon its current revolutionary course,” adding:

The Iranian regime has a choice. It can either do a 180-degree turn from its outlaw course of action and act like a normal country, or it can see its economy crumble.

We hope a new agreement with Iran is possible, but until Iran makes changes in the 12 ways that I listed in May, we will be relentless in exerting pressure on the regime…Rest assured Iran will never come close to getting a nuclear weapon on President Trump’s watch.

After repeatedly calling the Iran nuclear deal the “worst ever” agreement negotiated by the United States, Trump announced in May that his administration was withdrawing from the pact and reimposed the first round of sanctions on Tehran in August.

“The Iran sanctions are very strong; they are the strongest sanctions we have ever imposed. And we will see what happens with Iran, but they’re not doing very well, I can tell you,” President Trump said on Sunday.