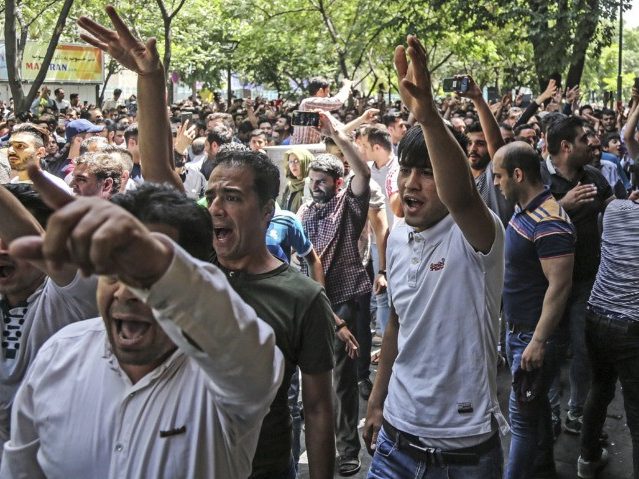 Iran has designated November 4 a “day of fight” against the “U.S.-Israeli-Saudi triangle of terrorism.” The date is significant for two reasons: it is the anniversary of Iran’s monstrous takeover of the U.S. embassy in Tehran in 1979 and, not coincidentally, it was chosen by the United States as the day renewed sanctions against Iran will take effect.

Iranian Brigadier General Gholam Reza Jalali told worshippers after Friday prayers in Tehran that November 4 “should be commemorated as the day of confrontation with the U.S., which is the manifestation of terrorism.”

“Today, the enemy has begun a new phase of confrontation with us, in which we are faced with a combination of threats including psychological operations using the media, cognitive operations to influence the people through economic warfare, and the imposition of sanctions and the attempt to insecure Iran,” he said.

Jalali was quoted by another “semi-official” news agency called ISNA this week claiming the Iranian president’s cell phone was “bugged” by unknown parties, and also that Iran’s cybersecurity teams have thwarted a new effort to infect government computers with the Stuxnet virus, widely seen as an American-Israeli cyberattack on Iran’s nuclear program in 2010.

Iranian Supreme Leader Ayatollah Ali Khamenei alluded to this claim on Sunday when he called for “scientific, accurate, and up-to-date” measures against “the enemy’s complex practices” and attempts at “infiltration.”

“November 4 this year translates into a new instance of oppression by America,” President Hassan Rouhani thundered earlier this week.

Iranian Foreign Minister Mohammed Javad Zarif on Thursday tried blaming Israel’s Mossad for running a “program to kill the JCPOA,” which is the formal name of the nuclear deal. Zarif portrayed the sinister Israelis as manipulating the Americans with what appears to be an “incredible series of coincidences” when examined by less practiced eyes than his own.

The Iranian Islamic Revolutionary Guard Corps (IRGC) pitched in a few weeks ago with a marching drill that depicted the U.S. White House adorned with a giant Star of David while soldiers chanted, “America, America, death to your deception! The blood of our youth is dripping from your fingers!” and “Death to America, death to Israel!”

Iran’s state-run Tasnim news agency notes the regime sees no hypocritical conflict between accusing other nations of “terrorism” on the day Iran’s revolutionary government perpetrated one of the worst acts of terrorism in history. On the contrary, Iran’s official mythology portrays the kidnapping of 52 American diplomats as a justified response to American support for the overthrown Iranian monarchy, describing the former U.S. embassy as a “den of espionage.”

The Iranian government organizes rallies on the embassy kidnapping anniversary every year as a demonstration of revolutionary commitment, nationalist fervor, and anti-Americanism. The slogan for this year’s event translates to “Never to Humiliation!”

This year, the Iranian government will have to convince some citizens to stop protesting Tehran for a couple of days so it can protest Washington. Not only that, but unhappy Iranian citizens have lately developed a bit of nostalgia for the late Shah Reza Pahlavi and have been overheard wondering if the hardline Islamist revolution commemorated on November 4 was really such a good idea.

It usually is not difficult for the regime to get people in the streets waving “Down with U.S.A.” signs, and many of them are willing to hold U.S. sanctions wholly or partially responsible for Iran’s terrible economy, but Reuters found the Iranian man-on-the-street in a weird place on Friday because the regime has been laboring so hard to convince them American sanctions mean little against the might of Iran.

The theocracy is simultaneously attempting to tell its people the sanctions are a trifling distraction and they are the primary reason the currency is collapsing and rice costs three times as much as it used to. President Rouhani was last heard confidently predicting “the Americans will fail in their new plot and that they are actually in gradual retreat,” which somewhat interferes with the message that America is the reason Tehran’s store shelves are turning bare.

Some members of the Iranian business class are keenly aware the sanctions specifically exempt food and medicine, while others worry that all commerce will become extremely difficult as sanctions ratchet up. Reuters found some Iranians who are simply tired of protesting both their own government and others.