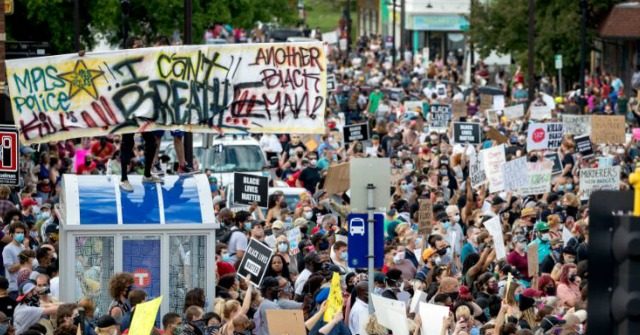 Government leaders and health experts fear the novel coronavirus, which has disproportionally plagued minority populations, could spread rapidly during mass protests over the death of George Floyd.

On Sunday, Washington, DC, Mayor Muriel Bowser (D) warned during NBC News’s Meet the Press that the protests, which tend to descend into rioting and looting at night, could “compound” the deadly and highly contagious COVID-19, the disease caused by the coronavirus:

I’m concerned that we had mass gatherings on our streets when we just lifted a stay at home order and what that could mean for spikes in coronavirus cases later. In fact, I’m so concerned about it that I’m urging everybody to consider their exposure — if they need to isolate from their family members when they go home and if they need to be tested — because we have worked very hard to blunt the curve.

And while I saw some people with masks last night, others didn’t. When I saw some people social distancing, other people were right on top of each other. So we don’t want to compound this deadly virus and the impact it’s had on our community.

Maryland Gov. Larry Hogan (R) expressed a similar sentiment on CNN’s State of the Union, saying he is “a little bit concerned” about the protests fueling the further spread of the coronavirus.

Right now, the immediate concern is to lower the temperature, stop the looting, and potentially keep our citizens safe from the riots that are going on. But the next step is to worry about this, what we have been focused on for the past couple of months, is the safety — dealing with this coronavirus.

And there’s no question that, when you put hundreds or thousands of people together in close proximity, when we have got this virus all over the streets, is — it’s not healthy. There’s about a 14-day incubation period. So, two weeks from now across America, we’re going to find out whether or not this gives us a spike and drives the numbers back up again or not.

Over the weekend, Breitbart News reported that some political leaders, namely in Minnesota and New York, fear that the mass protests and riots are an ideal breeding ground for COVID-19.

Minnesota Gov. Tim Walz (D) expressed concerns about the riots’ impact on coronavirus, declaring on Saturday that “it’s inevitable” the demonstrations will lead to an increase in cases.

“I am deeply concerned about a super-spreader type of incident,” the Democrat governor said. “We’re going to see a spike in COVID-19. It’s inevitable.”

“We know, large gatherings do pose a risk in any epidemic, but certainly where we stand today with the state of COVID-19 spread in our community,” she said. “Knowing that we have community spread, we just want to again encourage folks who gather to be mindful of the risk.”

Officials in New York, considered the epicenter of the pandemic in the United States, shared Gov. Walz’s fears about the potential for a rise in coronavirus among protesters.

I would still wish that everyone would realize that when people gather, it’s inherently dangerous in the context of this pandemic, and I’m going to keep urging people not to use that approach, and if they do, they focus on social distancing and wearing face coverings.

“The last thing we would want to see is members of our community harmed because the virus spread in one of these settings,” he added.

On Monday, Cuomo indicated the demonstrations could jeopardize the state’s huge gains against the deadly virus.

The protests and riots sweeping cities across the nation, including New York City, “could potentially be infecting hundreds and hundreds of people, after everything that we have done,” the governor noted.

He added, “We have to take a minute and ask ourselves, what are we doing here?”

Public health experts also warned that the crowds participating in the protests across American, numbering at the very least in the tens of thousands, could cause a surge in COVID-19 cases.

Yes, the protests are outside, but they are all really close to each other, and in those cases, being outside doesn’t protect you nearly as much. Public gatherings are public gatherings — it doesn’t matter what you’re protesting or cheering. That’s one reason we’re not having large baseball games and may not have college football this fall.

“There are a huge number of asymptomatic carriers, and that makes it hugely risky,” he added.

In an interview with CBS News’s Face the Nation, Dr. Scott Gottlieb, a former commissioner of the Food and Drug Administration (FDA), predicted that mass demonstrations would lead to new “chains of transmission.”

Floyd died last Monday after a Minneapolis after Derek Chauvin, a now-fired white police officer, kneeled on his neck for several minutes in an incident caught on camera. Floyd was unarmed.

On Friday, authorities charged Chauvin with third-degree murder and manslaughter.