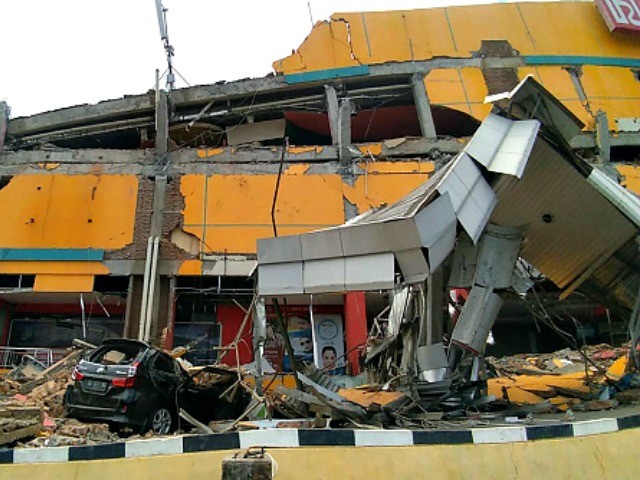 A tsunami in Indonesia killed more than 420 people and injured many more after a ten-foot wall of seawater engulfed the city of Palu and the surrounding area on Friday.

The tsunami, which hit 34 minutes after a 7.5-magnitude earthquake struck Indonesia, churned over the island in the center of Indonesia and killed more than 420 victims in Palu alone.

A video of the tsunami showed a giant wave swallowing the shoreline of the central Indonesian island, bulldozing palm trees and dragging away its victims on lower ground as terrified onlookers sheltering on higher ground cried for help.

Officials announced Saturday that the storm claimed more than 420 casualties, and fear there could be many more as they began to account for the devastation on the island about 800 miles northwest of Jakarta.

Indonesian Vice President Jusuf Kalla told local media the death toll could rise to more than 1,000 people. Hundreds of people had been gathered in the city for a beach party when the tsunami hit.

“People were still going about their activities on the beach and did not immediately run,” said Sutopo Purwo Nugroho, spokesman for Indonesia’s National Disaster Management Agency, adding that the death toll would “continue to rise as the search continues.”

The Red Cross is sending volunteers and staff to affected areas, but aid agencies and Indonesian authorities struggled to reach certain areas due to landslides, destroyed roads, and limited communication.

Palu’s airport closed because of the damage suffered from the earthquake. Even deliveries by sea have posed a challenge to the affected area as the tsunami severely damaged Palu’s port. Homes and other buildings in the area also suffered from flooding and structural damage.

The country declared a state of emergency Saturday to mobilize state disaster resources to be used for aid and rescue efforts.