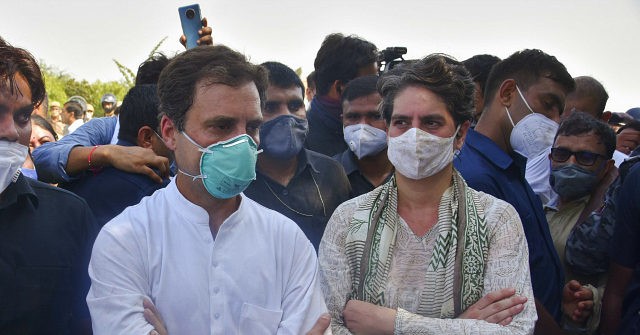 Police detained two Indian opposition leaders on Thursday for participating in a march to visit the family of an alleged gang rape victim in the northern state of Uttar Pradesh.

Authorities accused the politicians of allegedly violating coronavirus social distancing mandates by marching with the crowd.

“The Gandhis were detained as they were walking to their destination after their vehicles were stopped at Yamuna Expressway, citing imposition of Section 144 [prohibiting unlawful assembly],” according to the Hindustan Times.

The report suggests that the politicians were forced to proceed to their destination on foot after police first tried to stop them from driving to Hathras.

The Gandhis were “taken away in a police jeep on Thursday evening and kept in a guest house for some time. Then, they were released and escorted back to Delhi [the national capital] by the UP [Uttar Pradesh] police,” according to the newspaper.

The sibling politicians belong to the Indian National Congress (INC), a left-wing opposition party in India.

The official INC Twitter account posted video footage on Thursday appearing to show police escorting the Ghandis to Delhi via police jeep. The INC alleged that its members were arrested by the Uttar Pradesh police.

Shri @RahulGandhi, Smt @priyankagandhi & senior Congress leaders have been arrested by the UP police.#JusticeForIndiasDaughters pic.twitter.com/mZ3hMj84Z9

Before being detained, the Ghandis were attempting to visit a family member of an alleged gang rape victim whose case has caused a storm of controversy in India over the past two weeks. The 19-year-old woman died at a Delhi hospital on Tuesday morning, two weeks after she was allegedly gang raped by four men in Hathras on September 14. State police then cremated the woman’s body on Tuesday night, allegedly against the wishes of her family.

The Uttar Pradesh police have faced public scrutiny “over alleged lapses throughout the case … [and have] been accused of rushing the cremation in a desperate cover-up attempt,” India’s NDTV reported on Wednesday.

The woman died on Tuesday after succumbing to serious injuries sustained during the alleged attack. According to the woman’s family, the police initially accused the woman of lying about her injuries. They first registered her report of the crime as an attempted murder case and waited a full week to add rape charges. A senior Uttar Pradesh police officer told reporters on Tuesday that rape in the woman’s case had not been confirmed and that police were awaiting the results of a forensic report.

The police obtained the results of the woman’s forensic exam on Thursday and cited them to deny that she was raped.

“The samples did not have sperm and thus makes it clear that no rape or gang rape took place with the girl,” additional director general of Uttar Pradesh police, Prashant Kumar said.

Indian medical experts reacting to the news on Thursday cited “lapses in the medical examination procedure, which occurred eight days after the alleged rape, and said it violated national and international guidelines that say the scrutiny [examination] must be done at the earliest in cases of sexual assault,” according to the newspaper.

“On Thursday, Safdarjung hospital [where the woman was treated] issued the woman’s death summary and autopsy report, which mentioned strangulation, cervical injuries, sepsis and cardiopulmonary arrest as the final diagnosis. The private parts showed healed tears and wounds, said the postmortem report,” the Hindustan Times relayed.