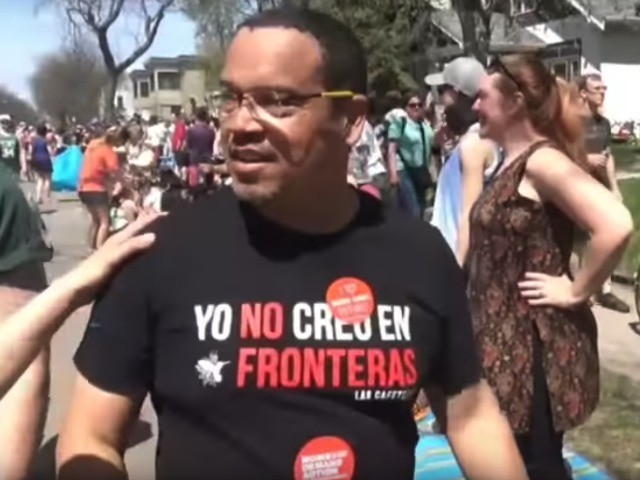 President Donald Trump criticized Minnesota Democrat Keith Ellison during a rally in the state on Thursday.

He reminded voters that Ellison marched in a parade wearing an “I do not believe in borders” shirt.

@JoeTalkShow Keith Ellison- translation – I don’t believe in borders. Joe keep talking about him everyday. The news media in MN is silent. pic.twitter.com/utXVeRpzjW

Trump noted that Ellison, the Deputy Director of the Democratic National Committee, sponsored a government takeover of healthcare.

Ellison is running for Minnesota Attorney General, despite his former girlfriend accusing him of physical violence. Trump did not mention the allegations.

Trump gave Ellison credit, however, for predicting that he could win the Republican primary, referring to a 2016 video clip of reporters laughing at the idea.

“That’s the last time he was right!” Trump said.

Spotting NYT reporter Maggie Haberman, Donald Trump mocks her during his rally in Mississippi for this TV moment in 2016 pic.twitter.com/PPGnYETHVJ

Trump said that when he first announced his run for president, the media thought he was doing it for fun.

“You think this is fun? This is a lot of work,” he said. “A lot more work than anybody knew.”