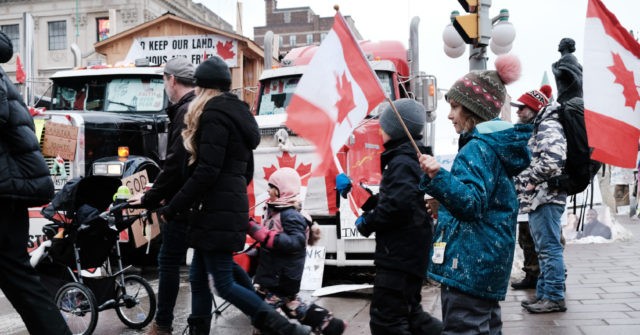 Poilievre made his comments during an interview with Canadian journalist Anthony Furey saying, “I’m proud of the truckers and I stand with them,” and added: “They have reached a breaking point after two years of massive government overreach of a prime minister who insults and degrades anyone who disagrees with his heavy-handed approach.”

“But let’s be honest, if Canadians are being inconvenienced, or in any way suffering from these protests, it is because Justin Trudeau made these protests happen and his intransigence is keeping the protests going,” he said, the National Post reports.

Freedom is on the move.

Poilievre, who currently serves as Shadow Minister for Finance of Canada, accused Prime Minister Trudeau of trying to divide Canadians on the issue of vaccines and of demonizing the unvaccinated in Canada.

Previously, Trudeau has questioned why Canadians should “tolerate” unvaccinated fellow citizens and has labelled the Freedom Convoy protestors in Ottawa and elsewhere a “fringe minority” with “unacceptable views. ”

“They don’t believe in science/progress and are very often misogynistic and racist. It’s a very small group of people, but that doesn’t shy away from the fact that they take up some space,” Trudeau said previously, conintuing: “This leads us, as a leader and as a country, to make a choice: Do we tolerate these people?”

“But now it’s blown up in his face,” Poilievre said. “So he’s gotten himself into an impossible political situation. And unfortunately, the rest of the country is held hostage by his unwillingness to do the right thing, admit he was wrong, and lift these mandates.”

Canadian Elites are doing everything they can to trash the Freedom Convoy movement with smears and attacks. https://t.co/qaOn5Ey0EA

Poilievre announced his intention to run for the leadership of the CPC following the ousting of former leader Erin O’Toole in a shock vote by CPC MPs during the first week of the Freedom Convoy protests.

CPC Interim leader Candice Bergen has also expressed her support for the Freedom Convoy protestors and slammed Prime Minister Trudeau earlier this week in the Hous of Commons, saying: “I look at our country Mr Speaker, and I’ve never seen it as divided as it is now under this prime minister.”

“Does he regret calling people names who didn’t take the vaccine?” Bergen asked.

“Does he regret calling people misogynist and racist and just, escalating and poking sticks at them and being so divisive to individual Canadians that he might not disagree with, that he might have thought were wrong?”

Just days later on Thursday, Bergen stated that while she agreed with the sentiment of the protestors, she called on them to abandon the protests across the country and return home.

“The time has come for you to take down the barricades, stop the disruptive action and come together,” she said, adding: “The economy you want to see reopened is hurting. You protested because you love your country and you want your freedoms back. That message has been heard.”