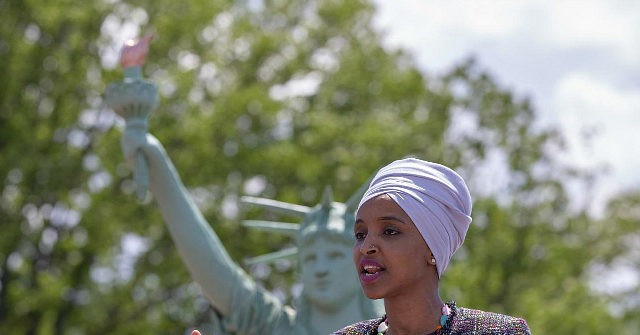 It seems that the particular conflict in Syria is being birthed out of a need for the people to have freedom and to actualize democracy and I’m concerned that most of our cues right now [are] being taken from Russia, and Turkey, and Israel, and so I’m wondering if that’s sort of a counter message to what we say we are interested in achieving in Syria.

Jeffrey responded by saying the United Nations, backed by the United States, is committed to giving the Syrian people democracy “through free and fair elections monitored by the U.N., including the diaspora.”

“I believe Democracy should not be given, it should be earned by the people, and we should be in partnership with them,” the Minnesota Democrat followed up.

Omar suggested that Russia, Turkey, and Israel are influencing Trump’s Syrian strategy even though these countries do not coincide in their strategy with each other, making it impossible to appease all three.

Russia supports the Iranian-allied regime of Syrian dictator Bashar al-Assad, while Turkey backs the opposition. Although Moscow and Ankara have embarked on joint efforts to end the conflict, Turkey remains resolute in its support for Assad opposition forces.

The Russia-Turkey agreement late last year to push al-Qaeda-linked jihadis out of Syria’s Idlib region failed, with Moscow blaming Ankara for the lack of success. Now, the jihadis control most of Idlib and some of the surrounding areas — considered the last remaining rebel stronghold in Syria.

Israel has targeted assets on Syrian soil linked to Assad’s ally Iran. Iran considers Israel, which shares a border with Syria, to be its mortal enemy.

In his written testimony, Ambassador Jeffrey condemned Russia and Iran for enabling Assad, noting that the Syrian regime has been able to re-conquer 60 percent of the war-ravaged country with the help of Moscow, Tehran, and Iranian proxies like Hezbollah.

Jeffrey noted that the Trump administration “is pursuing three mutually reinforcing whole-of-government strategic objectives in Syria – the enduring defeat of ISIS, the removal of all Iranian-led forces from Syria, and the resolution of the Syrian crisis through a political solution.”

Trump inherited the war in Iraq and Syria from former President Barack Obama, who started it in 2014 in response to the rise of the Islamic State (ISIS/ISIL).