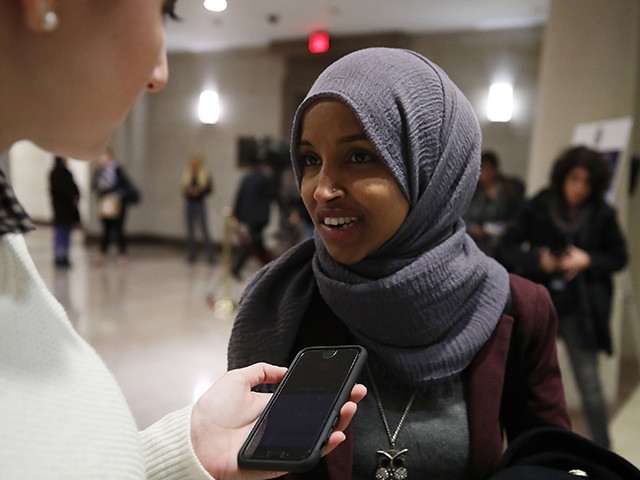 Asked for her thoughts on President Donald Trump calling on her to resign from Congress, Omar simply replied, “No thank you.”

Pressed for comment a second time by CNN congressional reporter Manu Raju, the Minnesota Democrat replied angrily: “Are you serious? What’s wrong with you?”

Raju then asked the freshman congresswoman about her Wednesday morning tweet in which she accused the president of trafficking in hate. “Yes I tweeted, and there’s a response. You can run that. Have a nice day,” she said while walking into a meeting.

Under pressure from Democrat and Republican leaders, Omar apologized on Monday for tweets suggesting AIPAC bribes Republican members of Congress to support Israel. “Anti-Semitism is real and I am grateful for Jewish allies and colleagues who are educating me on the painful history of anti-Semitic tropes. My intention is never to offend my constituents or Jewish Americans as a whole,” she said in a statement. “We have to always be willing to step back and think through criticism, just as I expect people to hear me when others attack me for my identity. This is why I unequivocally apologize.”

However, Omar concluded her statement with yet another shot at AIPAC, referring to its role in U.S. politics as “problematic.”

Ahead of a Tuesday Cabinet meeting at the White House, President Trump told reporters that he believes Omar should resign from the House Foreign Affairs Committee or from Congress. “Anti-Semitism has no place in the United States Congress. And Congressman Omar, it’s terrible what she said and I think she should either resign from Congress or she should certainly resign from the House Foreign Affairs Committee,” the president said. “What she said is so deep-seated in her heart that her lame apology, that’s what it was, it was lame and she didn’t mean a word of it, was just not appropriate.”

“I think she should resign from Congress frankly, but at a minimum, she shouldn’t be on committees, certainly that committee,” he added.