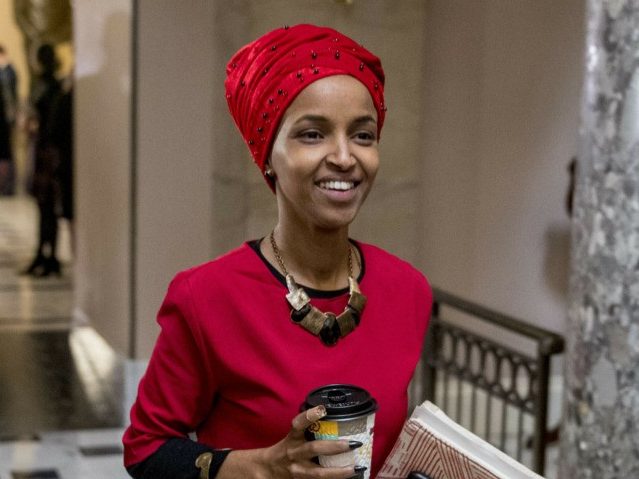 Rep. Ilhan Omar (D-MN) on Wednesday morning hit back at President Donald Trump’s call for the Minnesota Democrat to resign for tweeting anti-Semitic troupes, accusing the president of trafficking in “hate”  his “whole life.”

“Hi @realDonaldTrump- You have trafficked in hate your whole life—against Jews, Muslims, Indigenous, immigrants, black people and more. I learned from people impacted by my words. When will you?” Omar tweeted in response to a video of the president describing her apology for her anti-Semitic remarks as “lame.”

You have trafficked in hate your whole life—against Jews, Muslims, Indigenous, immigrants, black people and more. I learned from people impacted by my words. When will you? https://t.co/EqqTyjkiNE

Speaking to reporters ahead of a Cabinet meeting at the White House, President Trump called the freshman congresswoman to resign from the House Foreign Affairs Committee or from Congress as a whole. “Anti-Semitism has no place in the United States Congress. And Congressman Omar, it’s terrible what she said and I think she should either resign from Congress or she should certainly resign from the House Foreign Affairs Committee,” the president said. “What she said is so deep-seated in her heart that her lame apology, that’s what it was, it was lame and she didn’t mean a word of it, was just not appropriate.”

“I think she should resign from Congress frankly, but at a minimum, she shouldn’t be on committees, certainly that committee,” he added.

“Anti-Semitism is real and I am grateful for Jewish allies and colleagues who are educating me on the painful history of anti-Semitic tropes. My intention is never to offend my constituents or Jewish Americans as a whole,” Omar said in a statement. “We have to always be willing to step back and think through criticism, just as I expect people to hear me when others attack me for my identity. This is why I unequivocally apologize.”

“At the same time, I reaffirm the problematic role of lobbyists in our politics, whether it be AIPAC, the NRA or the fossil fuel industry. It’s gone on too long and we must be willing to address it,” she added.

Omar’s remarks came only after House Speaker Nancy Pelosi (D-CA) and other House Democrats Leadership members condemned her the tweets and urged her to apologize. “Congresswoman Omar’s use of anti-Semitic tropes and prejudicial accusations about Israel’s supporters is deeply offensive.” the lawmakers said. “We condemn these remarks and we call upon Congresswoman Omar to immediately apologize for these hurtful comments.”