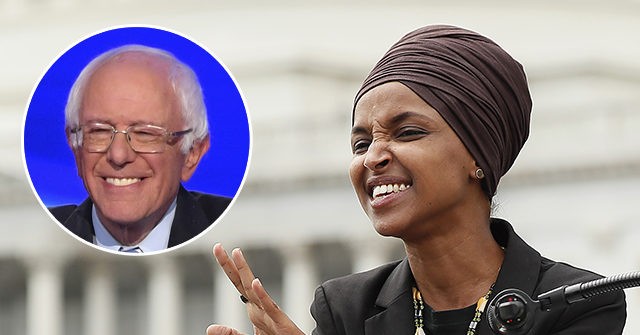 “Bernie is leading a working class movement to defeat Donald Trump that transcends generation, ethnicity and geography,” Omar said in a statement distributed by the Sanders campaign.

‘That is why he is fighting for a humane immigration policy that treats immigrants as human beings and not criminals. And it’s why Bernie is fighting to end our forever wars and truly prioritize human rights in our foreign policy—no matter who violates them. And it’s why I believe Bernie Sanders is the best candidate to take on Donald Trump in 2020,” the progressive lawmaker concluded.

New: Ilhan Omar and Rashida Tlaib will also endorse Sanders, according to source. AOC will, as @daveweigel and @WaPoSean first reported, will do the same on Saturday in NYC.

During tonight’s CNN-New York Times’ Democrat presidential debate, Sanders floated that a “special guest” would appear alongside him at his “Bernie’s Back” event in New York City.

The development comes after Sanders said that he “misspoke” when he told reporters he may slow his frenetic campaigning pace after a recent heart attack.

The Vermont senator backtracked in an interview with NBC News just a day after indicating that health concerns would force him to change “the nature” of his campaign, in the short term, at least.

“We’re going to get back into the groove of a very vigorous campaign,” Sanders told NBC, downplaying the impact of the heat attack, which required him to be rushed to the hospital where he received two stents to clear a clogged artery in his heart.

The 78-year-old self-described democratic socialist was hospitalized after experiencing chest discomfort while campaigning in Las Vegas last week. His staff initially said the stents were inserted for a blocked artery, revealing only two days later that he had had a heart attack.

Sanders told NBC it was “nonsense” to suggest his staff hadn’t been forthright about his condition. He said he was still talking to doctors and trying to understand what was going on.