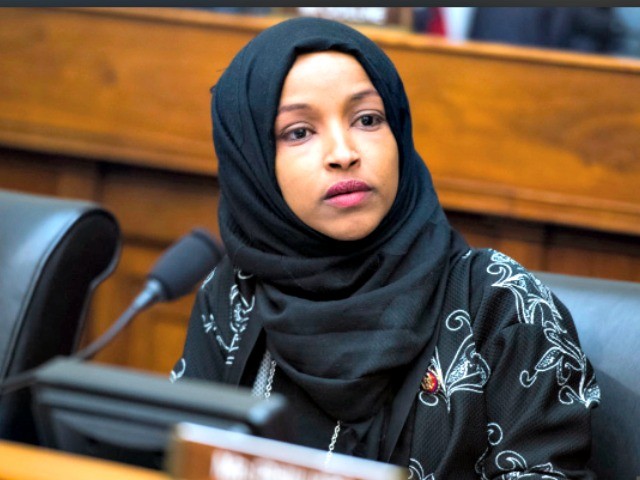 WASHINGTON, DC — Rep. Ilhan Omar (D-MN) clashed with the U.S. special representative for Venezuela on Wednesday, accusing the Department of State (DOS) official of deeming “massacre” and “rape” during the civil war in El Salvador in the 1980s a “fabulous” U.S. achievement despite him repudiating the assertion.

The congresswoman implied that Elliott Abrams, who served as top DOS official in Latin America during the 1980s, considered the massacre of civilians, including children, and the alleged rape of young women in El Salvador by U.S.-trained troops a “fabulous” U.S. achievement.

Abrams denied the accusation, but Rep. Omar insisted, “I will take that as a yes.”

Rep. Omar grilled Abrams over the U.S. military’s role in Latin America in the 1980s during a House Foreign Affairs Committee hearing on Venezuela Thursday.

Omar did not ask any substantive questions about the current situation in Venezuela, instead repeatedly comparing it to 1980s El Salvador. The hearing was titled “Venezuela at a Crossroads,” intended to give members of Congress an opportunity to explore productive ways the United States could help victims of socialism in that country.

Omar identifies as a socialist.

Below is a partial transcript of the exchange:

Rep. Omar: On February 8, 1982, you testified before the Senate Foreign Relations Committee about U.S. policy in El Salvador. In that hearing you dismissed as communist propaganda reports about the massacre in El Mozote in which more than 800 civilians, including children as young as two years old, were brutally murdered by U.S.-trained troops. During that massacre, some of those [American] troops bragged about raping a 12-year-old girls before they killed them … You later said that the U.S. policy in El Salvador was a fabulous achievement. Yes or no do you still think so?

Abrams: From the day that President [José Napoleón] Duarte was elected [in 1984] in a free election to this day, El Salvador has been a democracy. That’s a fabulous achievement.

Rep. Omar: Yes or no, do you think that massacre was a fabulous achievement that happened under our watch?

Abrams: That is a ridiculous question.

Rep. Omar interrupted: Yes or no?

Rep. Omar: I will take that as a yes.

Abrams: I am not going to respond to that kind of personal attack, which is not a question.

Rep. Omar went on to suggest that Abrams would “support an armed faction within Venezuela that engages in war crimes, crimes against humanity, or genocide” if he believed it would advance U.S interests, claiming that is what he did in Guatemala, El Salvador, and Nicaragua.

“I am not going to respond to that question,” a seemingly annoyed Abrams replied when asked if he would support such an armed group.

“The entire thrust of American policy in Venezuela is to support the Venezuelan people’s effort to restore democracy to their country,” the State official concluded.

Abrams dismissed as a personal “attack” Omar questioning his credibility over his pleading guilty in the early 1990s to misdemeanors for withholding information from Congress during the Iran-Contra scandal in the 1980s.

Mr. Adams [sic], in 1991 you pleaded guilty to two counts of withholding information from Congress regarding your involvement in the Iran-Contra affair, for which you were later pardoned by President H. W. Bush. I fail to understand why members of this committee or the American people any testimony that you give today to be truthful.

Venezuela is currently enduring the worst economic, political, and humanitarian crisis in its history as it nears the 20th anniversary of the socialist “Bolivarian Revolution” under late dictator Hugo Chávez. The average Venezuelan citizen cannot secure three meals a day and lost 24 pounds in 2017, the latest year for which that statistic is available. Dictator Nicolás Maduro has denied the existence of any food crisis in the country, claiming both the alarming statistics from the country and the millions-strong refugee exodus from his nation are American government fabrications.

The only remaining federal institution represented by democratically elected officials, the National Assembly, removed Maduro from power via constitutional means on January 23, replacing him with interim President Juan Guaidó. Maduro, who still controls the nation’s military, has refused to step down.

Shortly following Guaidó’s inauguration – legal under Articles 333 and 350 of the Venezuelan constitution, Rep. Omar took to Twitter to condemn the new president’s rise as a “coup” orchestrated by the United States. Omar referred to Guaidó and the Venezuelan opposition as “far-right” despite Guaidó’s party, Popular Will, being a full member of the Socialist International, one of the world’s oldest global institutions for leftist politicians.

Before U.S President Donald Trump took office, Abrams was critical of the commander-in-chief’s fitness to become the leader of the free world. Nevertheless, he is now working for the Trump administration.

In recent days, Rep. Omar, one of the first Muslim women elected to Congress, has come under fire again for anti-Semitic remarks, most recently