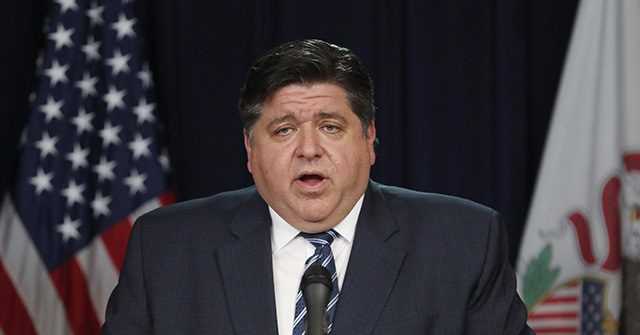 Monday on CNN, Gov. J.B. Pritzker (D-IL) said God would be with the protesters, some of which that faced tear gas and rubber bullets, that were cleared from Lafayette Square in Washington, D.C. so President Donald Trump could pay a visit to nearby St. John’s Church, which was damaged in a fire set during protests on Sunday night.

Pritzker said, “Reject the notion that the federal government can send troops into the state of Illinois. The fact is that the president has created an incendiary moment here. He wants to change the subject from his failure over coronavirus, a miserable failure, and now see a moment when there’s unrest because of the injustice that was done to George Floyd, that he now wants to create another topic and something where he can be the law and order president. He’s been a miserable failure. You know, what I talked about on the call today was the fact that his rhetoric is inflaming passions around the nation. He should be calling for calm. He should be calling for bringing the temperature down. He’s doing the exact opposite.”

Host Erin Burnett said, “Governor, what he just did was hold up a Bible, making it clear that that’s what he stands for. He’s the — I mean, I don’t know, what words would you put on it? God is behind him, he’s the president of law and order and of godliness? What do you make of that very bizarre moment?”

Pritzker said, “Look, he continually lies. The fact is that God is on the side of those who stand up for American values, those who stand up for freedom, those who stand up for the rights of everyone in our nation. And that means standing up for the peaceful protesters. You saw what he did to the peaceful protesters. Those are federal troops under his command. He obviously wanted them pushed back, tear gas in the streets in Washington, D.C., so he could look like he needs to bring order to the nation. And the fact is that he should stay out of our business. We are working hard in the state of Illinois to bring down tensions. And look, every day, he has inflamed racial tension.”

He continued, “It’s precisely the wrong way to handle that. Peaceful protesters have a right to be there. I saw what happened. I was watching CNN when all of a sudden, the troops move forward, and then they started pushing the protesters, throwing tear gas canisters. This is not the way we behave in the United States. Our law enforcement are out there on streets trying to protect people. They’re not, at least here in Chicago, we’re not in the business of trying to put down peaceful protests.”

While discussing the call the Governor was on with Trump, Pritzker said, “We listened for a while as the president said some, frankly, outlandish things, crazy things. He talked about dominating the streets in all of our cities today. And then, you know, after he said all of that there were a few governors, mostly Republican governors who got on and said, you know, positive, complimentary things about the president. And I couldn’t believe that nobody was calling him out on his rhetoric. And so when I was called on, I just had to say what I said, expressing the values of the people of Illinois. You know, we’re a state that produced Barack Obama and the presidency, and we produced Abraham Lincoln, Ulysses S. Grant. We have a long history of standing up for, you know, equality and against racial injustice, and it’s time that more people stood up and said something because this president every day— and I’ve said it from the beginning, the man is a racist, a misogynist, a homophobe, a xenophobe. And he has to go.”