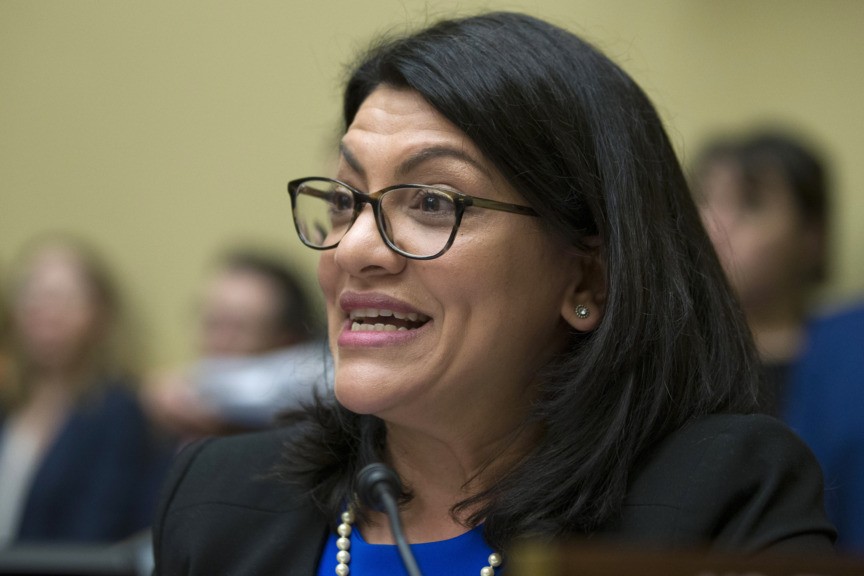 Rep. Rashida Tlaib (D-MI) is reportedly showing no signs of backing down from her pledge to spearhead impeachment proceedings against President Donald Trump, even after special counsel Robert Mueller’s investigation into possible collusion between the Trump campaign and Russia during the 2016 presidential election.

The freshman congresswoman’s continued effort to drum up support for impeachment goes directly against the wishes of House Democrat leaders, especially Nancy Pelosi (D-CA), who all but ruled out the potential move this month.

According to Business Insider, Tlaib sent a letter on Monday urging fellow Democrats to support a resolution calling on the House Judiciary Committee to probe into whether President Trump committed impeachable offenses.

“The actions of President Trump before he was officially sworn in as President of United States is currently being investigated by the Southern District of New York and much of it is part of the completed report by independent investigator, Robert Mueller,” wrote Tlaib.

“However, the most dangerous threat to our democracy is President Trump’s actions since taking the oath of office,” the Michigan Democrat continued.

She then went on to claim the president has refused to cooperate with investigations undertaken by House Democrats. This month, the House Judiciary Committee sent letters seeking documents from more than 80 groups, organizations, and individuals as part of the panel’s investigation into President Trump’s previous business dealings and campaign.

Thus far, past and current members of the president’s inner circle have complied with the sweeping request. Steve Bannon, the president’s former White House chief political strategist and 2016 campaign CEO, handed over 2,688 pages of information, while real estate tycoon and and Trump’s inaugural committee chairman Thomas Barrack has provided more than 3,349 pages. The National Rifle Association of America (NRA) has given 1,466 pages of information.

“Much of the allegations have yet to be fully investigated by this body who also took an oath to uphold the U.S. Constitution,” Tlaib wrote. “It is critical that we protect the American people and our country from any conflicts of interests that directly erodes our democracy.”

She continued: “I, firmly, believe that the House Committee on Judiciary should seek out whether President Trump has committed ‘High crimes and Misdemeanors’ as designated by the U.S. Constitution and if the facts support those findings, that Congress begin impeachment proceedings.”

Tlaib’s letter comes two weeks after Pelosi said in a wide-ranging interview with the Washington Post that impeachment was virtually off the table, arguing that President Trump is “just not worth it.”

“Impeachment is so divisive to the country that unless there’s something so compelling and overwhelming and bipartisan, I don’t think we should go down that path, because it divides the country. And he’s just not worth it,” the House Speaker said.

Moreover, other top Democrats have also voiced opposition to discussions about impeachment, including Nadler, who urged caution until the release of Mueller’s report.

“Impeachment is designed as a defense of the republic against a president who would aggrandize power, destroy liberty, destroy Democratic institutions, destroy the separations of power,” Nadler told CBS News earlier this year. “If that happens, if you get real evidence of that, then you have to consider impeachment hearings.”

“There’s certainly a lot of allegations, but we’ll have to wait and see what the Mueller investigation comes up with and other investigations looking into it,” he added. On Sunday, the Department of Justice said it found it could not prove Trump’s presidential campaign “conspired or coordinated” with the Russian government in the 2016 presidential election.

Tlaib’s efforts shouldn’t come as a surprise, as the Michigan Democrat congresswoman vowed before progressive activists just hours after being sworn in that she would “impeachment the motherf*cker”– a reference to the president.

In a recent press conference held in her office foyer, Tlaib claimed that public outrage has driven her to introduce a measure to investigate the president for impeachable offenses and vowed to do so by the end of the month.

“We saw record turnout in an election year, where people wanted to elect a jury that would begin the impeachment proceedings to Donald Trump,” Tlaib said.

“We want to work on these economic justice issues, racial justice issues,and everything,” the freshman congresswoman added. “But guess what? There is a wall there, and a constitutional crisis that is not going to [let us] do our jobs as American Congress members to push a lot of these agendas forward.”

In addition to Tlaib, other Democrats have also signaled they will ignore House leadership and move forward with their own plans to bring impeachment proceedings against President Trump. In a recent appearance on MSNBC, Sen. Chris Murphy (D-CT) claimed the president’s actions have already “crossed the threshold of what was brought for impeachment” against President Richard Nixon.

“[W]hat we know is that the president’s behavior has already crossed the threshold of what was brought for impeachment before the House in the Nixon administration and the Clinton administration. In fact, he crossed those thresholds in the first weeks or months of office. And so, that is another means, if these other means fail, to control this president,” he said.

Last month, Rep. Al Green (D-TX) announced that he will bring a vote on impeachment to the House floor for a third time, despite failing to hold a successful vote in 2017 and 2018. The Texas Democrat said he will propose the measure regardless of Mueller’s findings, vowing to “act on Trump’s bigotry.”