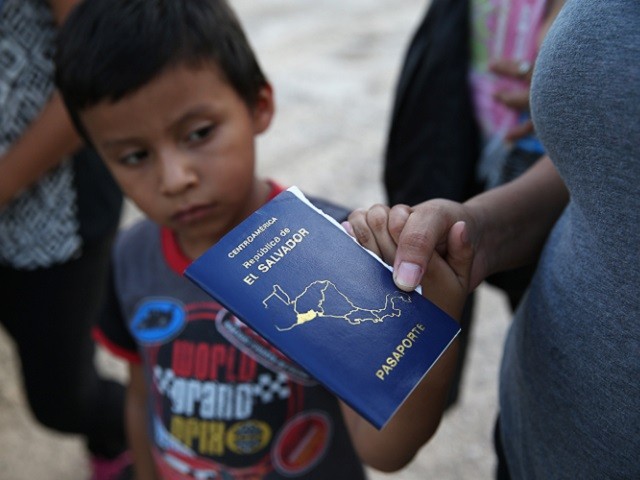 President Donald Trump’s deputies are arresting more of the illegal migrants who try to pick up their youths and children at the shrinking U.S. exit of the so-called ‘UAC’ smuggling route.

Under President Barack Obama, the federal agencies quietly cooperated with the many illegals who contracted with cartel-overseen smugglers to bring their Central American youths and children up to the U.S. border.

As required by law, the youths and children were accepted from the coyotes by the border patrol and then relayed to shelters run by the Department of Health and Human Sevices. Obama’s HHS then completed the delivery contract by passing the UACs to their illegal alien parents without referring the illegals to the immigration enforcement agencies.

Obama’s officials tried to hide the cooperation by describing the coyote-escorted migrants as “Unaccompanied Alien Children” and suggested that most of them were young children, not teenage youths. The establishment media quickly adopted the same language and imagery.

In contrast, Trump’s deputies are now arresting many of the illegals who offer to “sponsor” the smuggled youths and children at the government shelters.

The arrest policy means that the illegals risk deportation if they try to pick up their youths and children after paying the cartels to deliver them to the border agency.

The pipeline shutdown also means a rising number of migrant youths are being kept in HHS shelters — at least until illegal migrant parents stop paying smugglers to deliver their children to the border. The Chronicle reported:

The arrest totals were released as the number of undocumented immigrant children in government custody has reached record highs, with no signs of slowing down. The number has surged to more than 14,700, according to a source familiar with the total.

Democrats are protesting Trump’s closure of the smuggling route which was set up by Obama’s deputies in 2014. The Chronicle reported:

“It’s outrageous,” Sen. Kamala Harris, D-Calif., said in reaction to the news. “I don’t know if this is intended or unintended, but a natural consequence of this is that these children will have nowhere to go.”

Harris and other Democrats are trying to keep the route open with legislation and lawsuits that would prevent officials from deporting illegal migrants who offer to “sponsor” their UAC children held at federal agencies.

In 2019 and 2020, Democrats will try to use their power in the House to block Trump’s use of the agencies to gradually curb legal and illegal immigration. Trump’s lower immigration/higher wages policies are helping to nudge up wages before November 2020, ensuring near-unified opposition by the bipartisan establishment. However, Trump can use his veto pen to block wage cutting amnesties.

The child smuggling route has been in operation since at least 2014. That December, Texas judge Andrew Hanen slammed Obama’s border agencies for working with the coyotes. The Daily Caller reported Hanen’s decision in 2013:

The smuggler, Mirtha Veronica Nava-Martinez, was arrested and the [client’s] child detained at a Texas border checkpoint when they were caught trying to use a birth certificate that belonged to Nava-Martinez’s daughter …

“Customs and Border Protection agents stopped the Defendant at the border inspection point. She was arrested, and the child was taken into custody. The DHS officials were notified that [the Virginis-based mother] Salmeron Santos instigated this illegal conduct,” the judge continued. “Yet, instead of arresting Salmeron Santos for instigating the conspiracy to violate our border security laws, the DHS delivered the child to her — thus successfully completing the mission of the criminal conspiracy. It did not arrest her. It did not prosecute her. It did not even initiate deportation proceedings for her. The DHS policy is a dangerous course of action.”

This was “the fourth case with the same factual situation this court has had in as many weeks,” Hanen wrote, adding;

The government is not only allowing [illegal migrants in the U.S.] to fund the illegal and evil activities of these cartels, but is also inspiring them to do so. … To put this in another context, the DHS policy is as logical as taking illegal drugs or weapons that it has seized from smugglers and delivering them to the criminals who initially solicited their illegal importation/exportation. Legally, this situation is no different.

On December 10, Trump’s federal lawyers also shot down a lawsuit by leftwingers who are trying to preserve a separate government program to transfer migrants into the United States. The program was opened by Obama’s deputies in 2014. The Associated Press reported:

The Trump administration provided adequate justification for its decision to end a program that reunited hundreds of immigrants from Central America with family members in the U.S., a federal judge ruled Monday.

Magistrate Judge Laurel Beeler threw out the bulk of a lawsuit that argued the termination of the Obama-era Central American Minors program was arbitrary and violated the U.S. Constitution.

The program allowed parents legally in the U.S. to apply to bring children or other family members living in Honduras, Guatemala or El Salvador to the U.S.

Under Obama’s tenure, officials approved nearly all requests by children and youths in Central American to be flown to their parents in the United State by U.S. taxpayers. The AP reported that 1,300 migrant youths and children were accepted into the program, and only one percent of applicants were excluded.

Trump’s deputies closed down the program in August 2017, blocking the transfer of an additional 2,700 Central Americans.

Trump builds a regulatory wall against the establishment-approved inflow of wage-cutting migrants. His determined policy was made possible by departed AG Jeff Sessions, and will be far more effective than Trump’s concrete-and-rebar border wall. https://t.co/ixVyvWTsyw

Also, a growing number of deported Central American migrants are leaving their children in the United States, often to be adopted by relatives. The decision is rational for many of the poor migrants because it gives their children a chance to get an American education, to live in a wealthy society, and even become naturalized Americans.

Congress has opposed President Trump’s plans to shrink the illegal migration flow, in part, because the flow is good for business and for many politicians, even as it imposes huge costs on blue collar and white collar Americans.

The Chronicle hinted at its opposition to the arrest policy, saying that “more than 100 of those arrested had no criminal record.” The comment suggested that migrants who work U.S jobs and do not break additional laws should be allowed to stay. That view is widely shared by business groups, Democrats, and business-first Republicans.