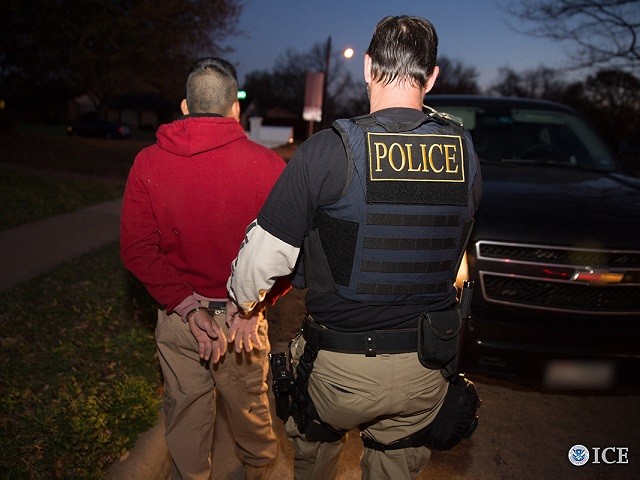 A total of 40 criminal and previously deported illegal aliens were arrested in the New England area by the Immigration and Customs Enforcement (ICE) agency in a three-day operation last week.

“This operation has removed many dangerous individuals from the community and will help contribute to the safety and security throughout the entire region,” ICE official Todd Lyons said in a statement.

Of the 40 illegal aliens arrested, they include:

A 22-year-old illegal alien from Guatemala, living in Lynn, Massachusetts, who was released from local custody despite having an ICE detainer placed on him. The illegal alien has been charged with domestic assault, battery, and accused of strangling a pregnant victim.

A 39-year-old illegal alien from El Salvador, living in Malden, Massachusetts, who was most recently convicted of child sex crimes.

A 27-year-old illegal alien from Guatemala, living in Cranston, Rhode Island, who was convicted of domestic assault. The illegal alien had an ICE detainer placed on him after being arrested but was released by local authorities instead of being turned over for deportation.

An illegal alien from El Salvador, living in Chelsea, Massachusetts, who has been charged with hit-and-run charges and driving without a license. The illegal alien is also a member of the Mara Salvatrucha criminal gang. He was previously deported from the U.S. in 2015.

Of the total 40 illegal aliens arrested in the ICE sting, eight were previously deported from the U.S. Re-entering the country after being deported is a felony.